Workers struggle to keep dry in back of lorry during downpour: 'This is medieval-period slavery' 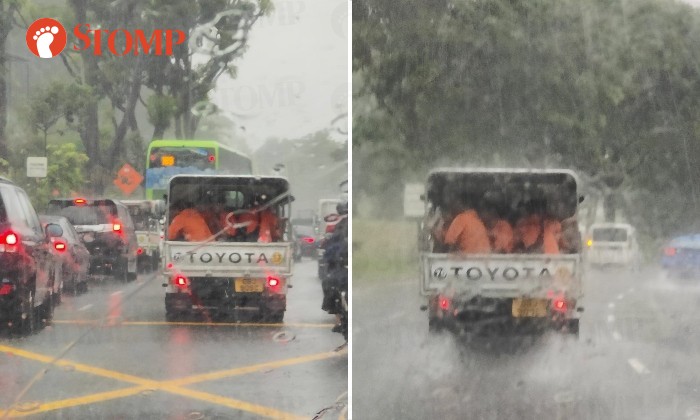 Should this be how we treat our fellow human beings?

Workers were seen trying to keep dry while being transported on a rainy Thursday morning (Sept 22).

Stomper Isabel shared photos of orange-clad workers huddling in the back of a Toyota lorry on the road during a downpour.

Even though the back of the lorry was covered, it was not covered enough to prevent the rainwater from going in.

"Kindly bring this to the attention of the Ministry of Manpower (MOM), Land Transport Authority, Migrant Workers' Centre and any government bodies to expedite on the rules to charter foreign workers via more appropriate transportation," said the Stomper.

"This kind of treatment is such 'medieval-period slavery'.

"The workers can be seen adjusting their position as they were not able to sit due to the rain and wet surface."

This is especially of concern now since the National Environment Agency said last week that more rainfall is expected for the second half of this month than for the first half.

In March, Senior Minister of State for Transport Amy Khor addressed the issue in Parliament.

She said: "We have heard calls to mandate rain covers for lorry rear decks to shield workers from the elements. Most employers today already do so.

"But we will take this one step further. LTA, with the support of MOM, has decided to mandate the installation of such covers on all lorries used to ferry workers. We will share implementation details at a later date."

At the same time, LTA said: "To improve worker welfare, the LTA, with the support of MOM, will mandate all lorries which are used to ferry workers to be fitted with rain covers.

"Currently, such lorries must be fitted with canopies to provide shelter, including against inclement weather. The rain covers, which are typically waterproof canvas tarps installed on the sides of the lorry rear deck, will complement the canopies.

"MOM and LTA will announce more implementation details in the second half of this year."