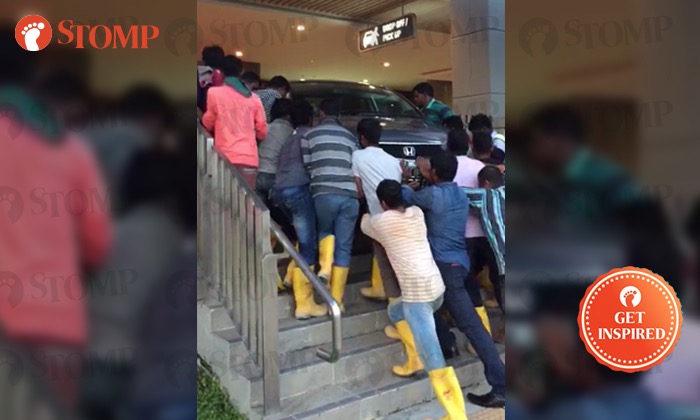 A car ended up on flight of stairs at Waterway Point shopping mall in Punggol at around 6.45pm today (Sep 21).

Stompers Garett and Sasha contributed photos from the scene.

According to Garett, the car driver appeared to have made a wrong turn after dropping someone off.

"I think he wanted to drive out after dropping someone off, but mistook the exit.

However, what left an impression on Garett was not the unusual accident or how it happened, but its aftermath.

"The main thing is not the poor fellow's car turning into the wrong way but how our locals were standing down there, whipping out our phones and starting to take pictures.

Admitting that he, too, was using his phone, Garett continued: "Meanwhile, our friends from another foreign country whipped out their phones to call for more help to shift the car. That's what I call 'Taking Action'!

"These are the very people who helped construct our skylines but yet are being unappreciated by some in our society."

Garett said that he really salutes the workers for displaying initiative, in contrast to other onlookers.

"The driver was in his car while the workers were pushing it and did not seem to be injured," he added.

Watch a video showing workers pushing the car, which Garett filmed, below.