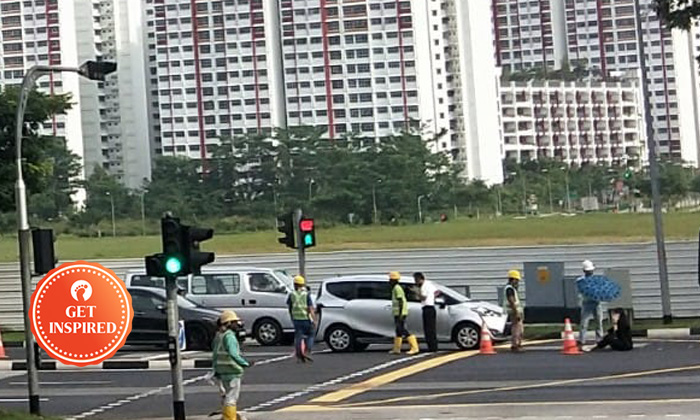 A group of kind foreign workers had not only shielded a woman from the sun but also made use of the materials they had with them to form a "protective circle" around her, after she got into a car accident along Bukit Batok Road at around 9.20am last Friday (Jul 6).

Cuifen had first shared her account of the incident on Facebook, Stomp then got in touch with her for more information.

The road accident had occurred near the workers, and one of them swiftly went to retrieve the woman's shoe which fell out before passing it to her.

For the sake of the woman's safety, the worker then gestured to his colleagues to bring out the cones and surround the woman with it.

One of the workers also shielded the woman from the sun with an umbrella as they waited for help to arrive.

Cuifen told Stomp that she was waiting for her GrabCar to arrive when she witnessed the incident.

She said: "I heard a bump and saw a lady fall onto the ground.

"I did not know whether to call the ambulance because from where I was standing, she did not seem injured, or to help the woman because my ride was arriving in two minutes.

"Luckily the workers were near when the accident happened and they went to help the lady.

"I was like, 'this is so awesome', the lady was well taken care of."

Cuifen added that she personally felt very grateful to the workers, as they were most probably busy with work and yet still rendered their assistance.

In a photo that accompanied her post, a woman is seen sitting on the road near a traffic light junction, while a worker shielded her with an umbrella.

In response to a Stomp query, the Singapore Civil Defence Force (SCDF) said that they were alerted to the road traffic accident at around 9.25am.

A woman was conveyed to Ng Teng Fong Hospital conscious.

Stomp understands that the woman was a pedestrian.

Many netizens also commended the workers for their act of kindness.

In May, kind foreign workers were also spotted using their break time to shield commuters from the rain at a bus stop opposite Block 323B Sengkang East Way.