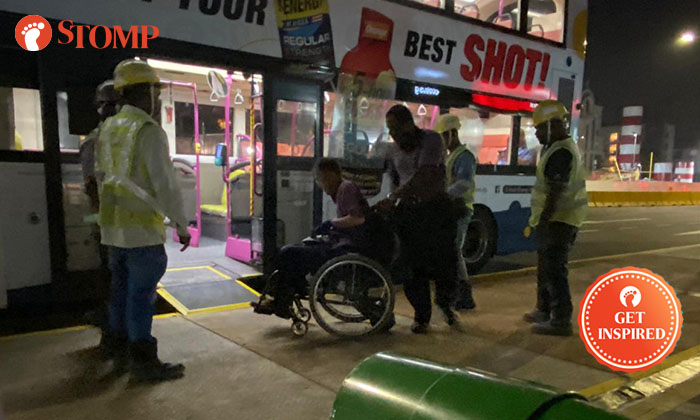 Five workers saved the day when an elderly man in a wheelchair was unable to board a bus in Marine Parade on Monday morning (Jan 13).

A Stomper took photos of what he saw and said: "I was waiting for a bus at about 5am.

"This bus stop in front of Block 87 Marine Parade Road was undergoing some constructions.

"I was curious as to why the workers were there so early and when I spoke to their supervisor, I found out that they were constructing a temporary bus stop due to some road repairs.

"The elderly man looked to be in his 60s. I saw the workers approach him and ask what bus he was waiting for.

"One of the workers went to the front of the bus stop to look out for his bus and flagged it down when it came.

"Four of them helped carry the man, together with his wheelchair, to the temporary bus stop.

"The temporary bus stop wasn't completely done yet, so they had to carry him over."

When asked about how he felt, the Stomper said: "I really appreciate these workers for working hard and especially overnight while everyone is sleeping.

"I hope people can try to be more understanding when they see these workers sacrificing their sleep. Without them, we wouldn't have such great and safe facilities to utilise.

"It could be inconvenient for us sometimes when footpaths or bus stops are being shifted, but just think of these workers sacrificing their sleep, enduring the hot sun, etc. just to ensure the safety of people using facilities.

"Just want to say thank you to the supervisor I spoke to who took time to explain the situation to me. Keep it up! You're doing great!

"Two thumbs up to these guys for helping members of the public even when they're working!"

Related Stories
Kind teens help aunty carry her bag home from Bedok bus interchange after accidentally breaking it
3-year-old boy brings goodies to SembCorp workers in Choa Chu Kang: 'They're his heroes'
Man leaves Rolex watch at Bugis coffee shop when drunk -- but never thought he would get it back
More About:
get inspired
inspiring
kudos
kind
heartwarming
heroes