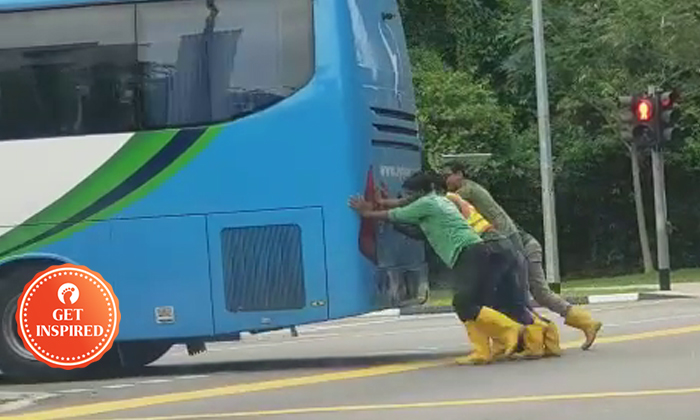 Upon seeing a tour bus stranded in the middle of the road, a group of workers and a soldier immediately sprung into action to get things moving along -- literally.

Facebook user Zye Hensem posted a video showing how the group helped to push the stalled bus until it could go on its way again.

He told Stomp that he had been driving down Lower Delta Road at around 10am yesterday (July 11), when he stopped due to a congestion at the junction of Kampung Bahru Road.

According to Zye, there were no passengers on the bus.

"A broken down bus was blocking the traffic flow towards VivoCity," he said.

"I saw the helpless bus driver waving at a group of foreign workers who were doing some landscaping works at Mount Faber Road.

"One of the workers, whom I believe is the leader, saw it and called the rest to help."

In a commendable display of strength and teamwork, the workers -- together with a soldier at the scene -- pushed the bus until it started moving again.

Zye added: "These workers simply stopped their work and proceeded to help readily.

"I was touched by their actions and sincerity, and decided to record a video while the traffic light was still red.

"Their act of kindness helped to prevent a massive congestion that had started to build up."

When a car found itself stuck on a staircase at Waterway Point last September in 2017, it was also a group of foreign workers who helped to free the vehicle without any hesitation.