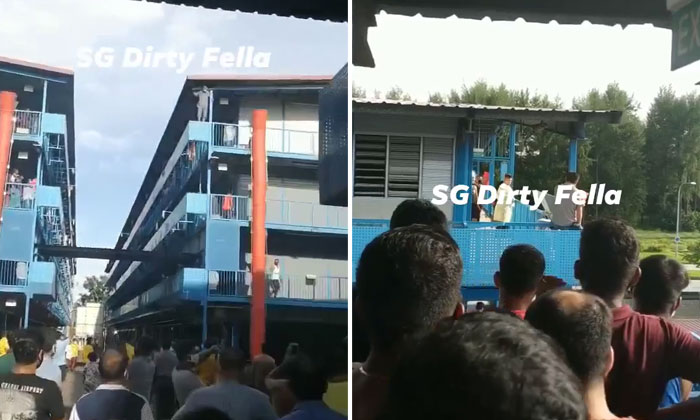 The Ministry of Manpower (MOM) said a migrant worker who was seen standing on a dormitory ledge in circulated videos was agitated after a dispute with his employer over returning to his home country.

The incident happened at PPT Lodge 1B dormitory on July 22.

A Stomper alerted Stomp to videos showing the man standing on the ledge of the top floor of a dormitory building as a crowd of other workers gather around.

MOM said in a statement on its Facebook page on Thursday afternoon (July 22) that it is aware of the incident.

"Investigations revealed that the worker purchased a flight ticket to his home country on his own and became agitated when his employer was not facilitative of his return," the ministry said.

"He is staying in a block that was already cleared on 4 July and could have discussed with his employer if he wanted to leave.

"However, both parties did not discuss this leading to a dispute.

"When the incident happened, the FAST team on site managed to calm the worker down and resolve the issue after contacting his employer.

"The employer was advised to facilitate the worker’s return and complied.

"The worker will leave Singapore today."

MOM also advised all workers not to put themselves in harm's way when involved in an employment dispute.