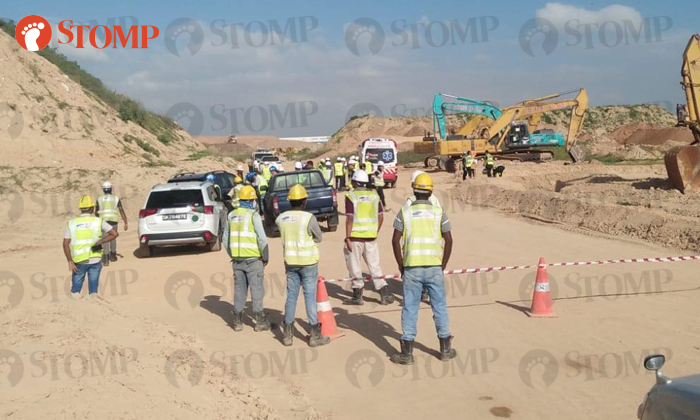 A 27-year-old man died in an accident at a worksite at 31A Tanah Merah Coast Road on Friday (Feb 22) after he was knocked down by a tipper truck.

The police said they received a call for assistance at 8.49am and arrested a 32-year-old man for causing death by a negligent act.

A photo contributed by Stomper Anonymous show the man, identified as an Indian worker, lying face-down on the ground.

His helmet lay nearby and blood can be seen on the ground.

In response to a Stomp query, a spokesman for the Ministry of Manpower (MOM) confirmed that it was informed of the fatal accident.

The spokesman said: "The worker was on the left of a tipper truck at a T-junction, when the tipper truck made a left turn and knocked him down.

The MOM is currently investigating the incident and all operations involving tipper trucks have been stopped, added the spokesman.

A spokesman for Changi Airport Group told Stomp: "We are sorry for the loss of life due to the accident this morning at the Changi East work site.

"Changi Airport Group is assisting the authorities in their investigations, and working with the contractor to provide assistance to the worker’s family."