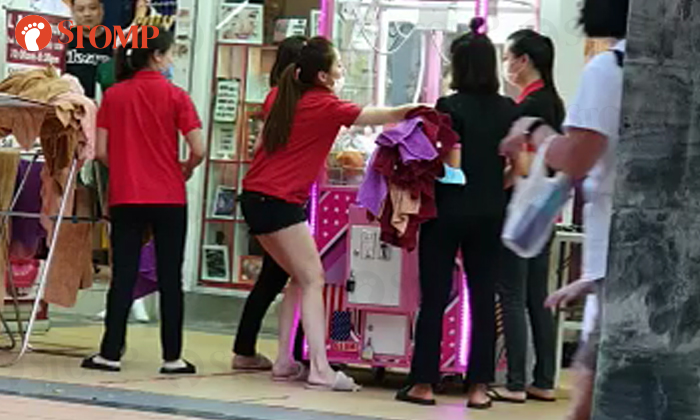 The claw machine is meant to be a simple game: Players inserted a token for a chance to grab their desired prize. If they did not succeed, they fed the machine more coins for another try.

However, people have gotten 'creative' of late by simply shaking the claw machine to get toys out of it despite the dangers of doing so.

Stomper Anonymous was passing by Block 183 Toa Payoh Central on Tuesday (Feb 25) when he noticed a group of women doing just that at a claw machine located outside a beauty salon.

Anonymous, who witnessed the incident at around 6.40pm, identified the women as staff from the salon.

In a video that Anonymous submitted to Stomp, four women can be seen surrounding the claw machine. One of them then uses both her arms to lift the machine.

Anonymous said: "They lifted and shook the machine twice.

"It's my first time seeing this happen here.

"Nobody stopped them and they left with two toys."