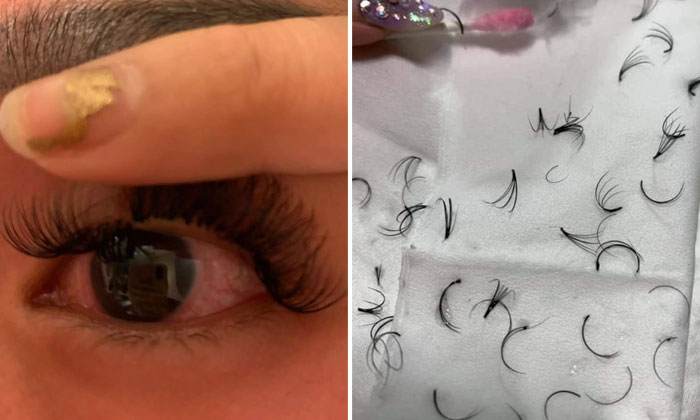 With so many options for beauty services these days, it is not uncommon for salons to offer cheap prices to lure customers.

Sometimes, it turns out to be a win-win situation but other times, it is a disaster.

A couple of Stompers alerted Stomp to their 'nightmarish' experiences after getting eyelash extensions done at a beauty salon at Parklane Shopping Mall.

Stomper Bibi told Stomp she visited Diva Lash and Nails on Sep 7 at 2pm and paid a promotion price of $40 to get lash extensions done.

"Usually it takes two to three hours," she said.

"The fastest I've ever done before is one hour but they did mine in 15 minutes."

Bibi, who is also a lash technician, said there is 'no way' to complete a set of lashes in 15 minutes.

"They used masking tape to tape their customers' eyes and their place wasn't sanitised.

"There were no disposable sheets on the bed and customers shared the same blanket, bed, and pillow."

Stomper Chels told Stomp that when she visited the same salon, the eyelashes were glued onto her eyelids instead of her eyelashes.

"My top lashes were glued to my bottom lashes," she said.

"It was just ripped apart using tweezers, even when I flinched, she continued to do the same thing.

"I literally thought my heart was going to jump out.

"This happened on both sides.

"My right eyelid was swollen when I was home.

"It was also the same side that most of my lashes fell off first.

"First night, without even touching my lashes, one of it was just dangling."

Bibi also shared similar experiences on her Facebook page of what other customers said about Diva Lash and Nails' services.

"It'll just be a lesson to never cheat on my lash girl ever again," said Chels.

"Ladies, if you think this is cheap, it's not (considering how long they last and how uncomfortable it is)."

Stomp has reached out to Diva Lash and Nail for comment.

Related Stories
Guy ends up with uneven hair after visiting Woodlands salon, told 'it will grow back'
Woman makes police report after skin on her toe gets shaved off during pedicure at Jln Bukit Ho Swee nail salon
Woman left with scars after allergic reaction to $300 waxing treatment at Bedok beauty salon
More About:
bad service
beauty
beauty salon