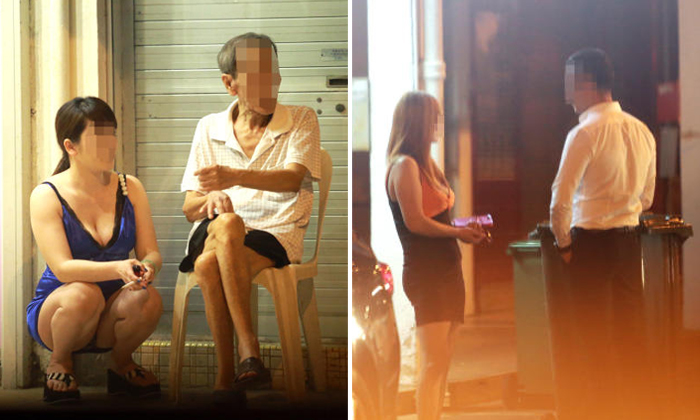 Sexily-dressed women have allegedly been soliciting for customers outside massage parlours along Upper Paya Lebar Road for the past six months.

A resident, who declined to be named, told Lianhe Wanbao that massage parlours have been operating from a row of shophouses along the street for the past few years.

They have never brought inconvenience to people until about half a year ago, when sexily-clad women began appearing at three of the massage parlours.

Wearing high heels, hot pants and heavy makeup, these women would stand by the roadside outside the massage parlours to 'openly solicit' for customers, said the resident.

The resident also revealed that every time he walked past the massage parlours, the women would approach him and ask, 'Want a massage? There are beautiful girls inside.'

He said that the women did the same thing to drivers who stopped by the roadside.

According to the resident, this goes on almost every night starting from around 9pm, till as late as 2am sometimes, giving the street a vibe that is similar to Geylang's.

The resident also said that his family is worried about the situation and the people it would attract, especially when they have to walk past the shophouses.

Although he has called the police around 10 times in the past six months, the women would run back into the massage parlours every time a police car entered the area.

The women would lock the doors and switch off all the lights to make it seem like the massage parlours were not in business, added the resident.

On March 28, at around 9pm, the resident called the police again but said the same thing happened.

He shared: "The women scattered but once the police left, they continued soliciting for customers. I really don't know what to do."