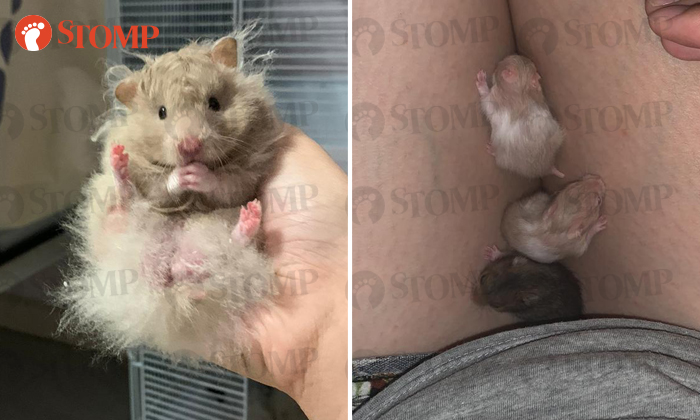 Police are investigating an incident where seven hamsters placed along a corridor at Block 680 Hougang Avenue 8 went missing along with their three cages on Thursday (Jan 9).

Stomper Bernice said that the Syrian hamsters, three of which are babies, were housed in three cages outside her unit.

She last saw them at around 1am on Thursday.

At around 7.40am, she discovered that the hamsters and cages were all gone.

Bernice told Stomp: "The cages were not secured to any fixed structure.

"When I opened the door, everything was gone. I believe they had been stolen.

"I hope whoever took my hamsters can return them. They are very good boys and girls.

"I am very worried and really hope that they can come home safely. I even have new cages ready for the baby Syrians."

Bernice made a police report on the same day.

In an advisory on its website, the Society for the Prevention of Cruelty to Animals (SPCA) urged all pet owners to keep their pets strictly indoors.

Keeping pets in the common corridors of public and private housing estates leaves the animals "vulnerable to the weather, theft or abuse by strangers," said the SPCA.

"Part of being a responsible pet owner, as well as to prevent animal abuse, is keeping your pets strictly indoors for their own safety and being mindful of others who might not be comfortable with animals," the advisory added.

Additionally, Syrian hamsters are highly territorial and solitary animals that should be housed alone. They should never be placed in the same cage as other hamsters or animals in case of attacks or fights, which can often turn fatal.

View more photos of Bernice's hamsters in the gallery.