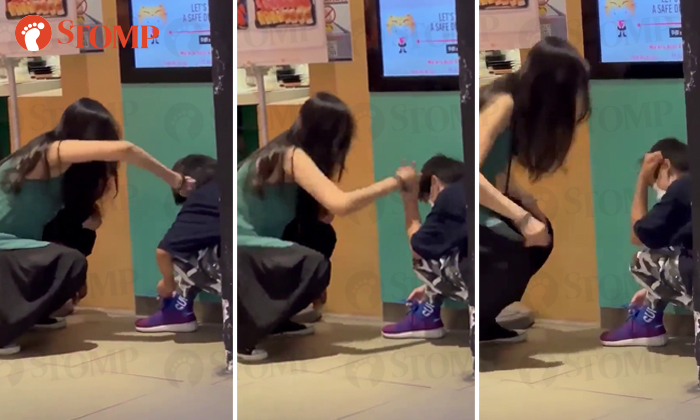 A woman was caught on camera loudly reprimanding a child and pinching his ear at 313 @ Somerset shopping mall on Saturday (Mar 19).

Stomper Wenqing witnessed the "disturbing" incident outside Sushi Express restaurant at around 2.35pm. She felt so concerned that she recorded a series of video clips, which she sent to Stomp.

Wenqing recounted: "The woman was scolding the boy for not knowing how to tie his shoelace and not following her instructions.

"What prompted me to take a video was that she actually kicked the boy twice when he was kneeling down to tie his shoelaces, while he was trying his best to do it in accordance to the way the woman wanted. I was so shocked."

In one clip, the woman can be seen shouting at the boy and then showing him how to tie his shoelaces. She is then seen pinching and twisting his left ear while yelling at him.

Another clip shows the woman continuing to watch the boy tie his shoelaces.

In the third clip, a man is seen telling the boy something before walking off. Meanwhile, the boy continues to try and tie his shoelaces while bent down.

Wenqing said: "The woman was scolding the boy incessantly, pulling and pinching his ear even though passers-by were staring at her.

"The boy looked visibly upset, shaken and frightened. I could see that his face was red even though he was wearing a mask.

"The woman and man then entered Sushi Express, while the boy was left standing at the same corner, red-faced. The man later came out and asked the boy to go in.

"I saw the three of them sitting at the sushi bar so I left, as I assumed nothing 'violent' would happen inside the restaurant."

Wenqing said she did not report the incident to the authorities, but added: "I felt disturbed and bewildered that such violent actions towards kids still exist today. I also felt sorry for the boy.

"The woman’s actions are very barbaric. Whether she is his mother or not, it is not right to treat a child in such a manner.

"I wonder what is happening at home and am concerned that this incident will scar the boy psychologically. Is this an appropriate manner of parenting?"