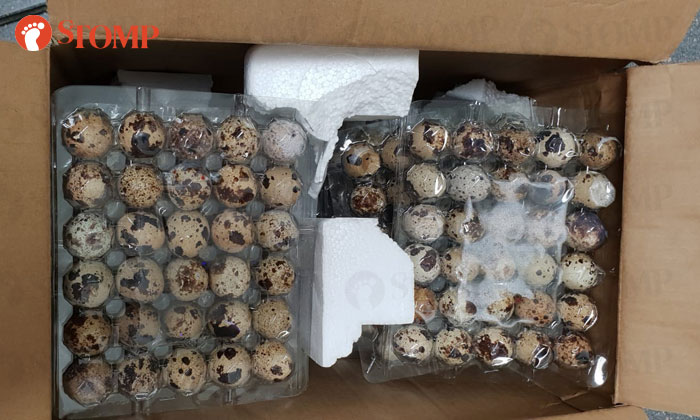 A 29-year-old woman was fined $6,000 on Monday (Oct 29) for illegally importing 330 embryonated quail eggs into Singapore, the Agri-Food and Veterinary Authority (AVA) and the Immigration and Checkpoints Authority (ICA) said in a joint statement.

On Oct 17, Tran Thi Bao Trang had brought a carton box filled with eggs in as checked baggage at Changi Airport.

ICA officers found 330 eggs in the box, which was lined with plastic egg trays, and referred the case to AVA.

Tran had contravened the Wholesome Meat and Fish Act for importing quail eggs from non-approved sources.

Those found guilty of importing food products from unapproved sources for the first time can be fined up to $50,000, jailed up to two years, or both.

In subsequent convictions, the offender can be fined up to $100,000 and/or jailed up to three years.

"The import of food, including meat and eggs, and their products, are regulated for animal health and food safety reasons," the statement said.

"Apart from food safety concerns, AVA has to remain vigilant to prevent diseases such as bird flu from being introduced into Singapore through such food products.

"While Singapore is free from bird flu, the disease is endemic in the region. Illegally imported food products, which may not have undergone the necessary heat treatment to inactivate the virus, is a risk for public and animal health."