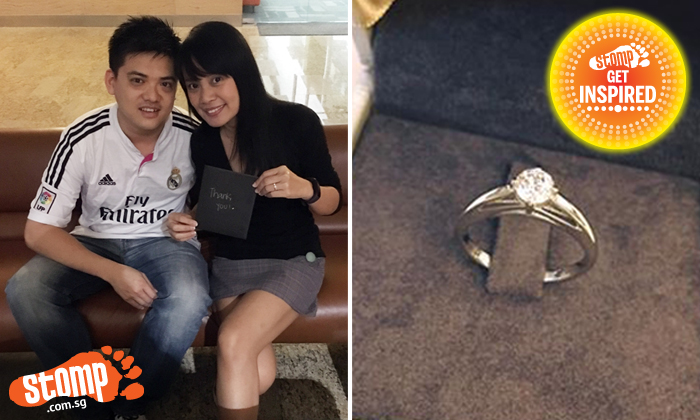 The woman who lost her engagement ring has been reunited with the valuable item, after Stomp connected her with the netizen who found it.

The ring had been found on July 20 by Jeslyn Tan, 30, who posted about the incident on Facebook, along with photos of it.

Yesterday (July 21), Stomp published an article about her posting after Stomper Ethel alerted us to it.

We had hoped to use our extensive reach as a website as well as on social media to help locate the ring's owner.

At the same time, we also got in touch with Jeslyn.

At 10am today (July 22), the owner of the ring contacted Stomp via our WhatsApp service to identify herself.

The 26-year-old woman, who declined to be named, does not use Facebook but had seen the aforementioned Stomp article about her ring after someone told her about it.

She also provided a receipt of the ring's purchase for verification purposes.

After Stomp confirmed that it was the exact ring that Jeslyn had found, we arranged for both parties to meet at our office on the very same evening.

In an exclusive interview, the owner revealed that she had bought the ring with her fiancé at Goldheart in VivoCity on Wednesday, and realised that it was missing at around 1.30pm during their train journey on the North-East Line.

"It was very dramatic because my boyfriend is a pilot and had to rush off for a flight to the Maldives less than two hours later at 3pm.

"He had wanted to give me the ring before he went overseas.

"We went back to look for the ring and even approached the control centre for help, but staff said they searched the whole train and did not find anything.

"So we were engaged, but without the ring. I had lost all hope of finding it."

According to Jeslyn, she had spotted the Goldheart bag under a train seat at Punggol MRT Station, at around 4pm that day. Nobody else appeared to have seen it as most people were engrossed in their phones.

"It was next to a man's legs and I wasn't sure whether to pick it up," she said, adding that a friend later suggested that she post about her find on Facebook.

Jeslyn told Stomp that her post, which has since gotten over 500 shares to date, earned her many friend requests and messages. Several people also claimed to be the owner of the ring, but none of them were able to verify it.

The ring's owner was full of gratitude after Jeslyn returned the engagement ring to her and even presented the latter with gifts to express her thanks.

The presents include a Swarovski pen, Godiva chocolates, a luggage tag and a thank you card.

The ring's owner said, "It's just something small. I hope you like it," to which Jeslyn enthusiastically replied, "Actually those [Godiva chocolates] are my favourite!"

Stomp also received a box of chocolates from the grateful owner for the part we played in reuniting her with her ring.

Check out more instances of how Stomp has made a positive difference to the lives of its readers here or read these exclusive stories:

Kind woman who helped injured elderly at Chinese Garden meets him after reading his Stomp report, gets big hug from him and receives SCDF award​

Remember 'exceptional' Comfort cabby who wowed foreigner? Stomp Team finds out what he's like in person

ITE students who helped elderly cabby change tyre: He was sweating and having trouble, so we volunteered to help

'Don't be scared to help': Wise words from teens who did CPR for cardiac arrest victims

Related Stories
Update: Stomp finds owner of lost engagement ring after kind netizen who found it posted an alert on Facebook
Did you lose this diamond ring? Someone wants to return it to you
More About:
inspiring
heartwarming
lost