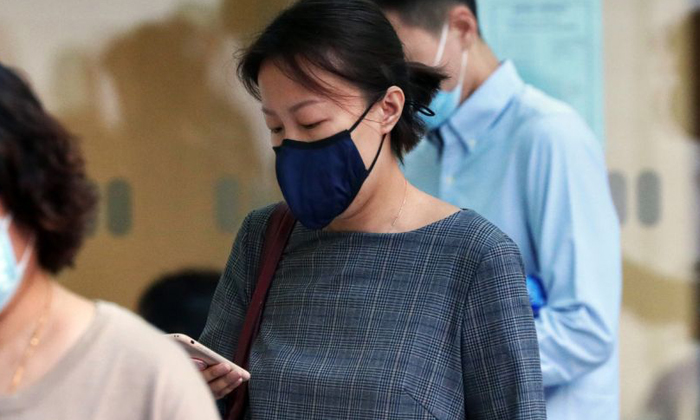 On various occasions between March and April last year, a 36-year-old woman leaked the number of daily Covid-19 cases before the Ministry of Health (MOH) officially announced them.

Singaporean Tang Lin was fined $10,000 on Friday (Aug 20) after pleading guilty to five charges of wrongful communication under the Official Secrets Act (OSA).

Four of the charges involved leaking to her colleagues at a bank the number of daily Covid-19 cases, which she got from her acquaintance Zhao Zheng - another Singaporean who was working in MOH at the time. Court documents did not reveal other details about Tang's job.

The other charge involved soliciting confidential information about a Covid-19 patient from 36-year-old Zhao.

The court heard that Zhao was the deputy lead of MOH’s Data Management Unit, which was set up by the ministry in response to the Covid-19 pandemic.

She was given access to and handled information relating to the pandemic situation in Singapore, including the daily number of confirmed Covid-19 cases and details of each case.

Zhao began sharing the daily number of cases in a WeChat group, of which Tang was a member, as early as March 16 last year.

She told the members of the group chat not to disseminate the information she gave them, among other things.

Tang initially shared information on the daily number of cases with other members of a WhatsApp group chat she was part of, through private messages or face-to-face conversations. There were five others members in that group chat, all of whom were her colleagues.

But she later progressed to sending the daily number of cases to the group chat, despite knowing that the information was confidential and had not yet been released to the public by MOH.

The court heard that Tang did so to encourage her colleagues to be more careful and take more precautions, as the number of Covid-19 cases was increasing daily at that time.

According to court documents, she shared the information in the group chat on nine occasions between March and April last year.

On March 27 last year, Tang also approached Zhao over WeChat for information about a confirmed Covid-19 case who resided in her condominium.

The court heard that Tang was concerned, as she had taken her son, then two years old, to the condominium’s common facilities, and was worried that the child might have inadvertently come in contact with the case.

She assured Zhao that she would not disseminate any details shared with her.

The next day, Zhao performed a search on a spreadsheet on the MOH intranet, which contained details of all the confirmed Covid-19 cases in Singapore.

She then told Tang that the case residing in her condominium was an imported one.

After Tang made further queries, she divulged the dates when the case had returned to Singapore and was admitted to the National Centre for Infectious Diseases.

Urging the court to impose a $10,000 fine, the prosecution noted that Tang’s case is one of several leaks of information by public servants during the pandemic.

As a result of the leaks, the public service had to adjust its approach in dealing with the Covid-19 crisis, it said.

This included ring-fencing certain processes, which reduced the speed of information flow between agencies during investigations.

The prosecution also said that a message has to be sent that public servants who are entrusted with confidential and highly sensitive information should be its guardians and not breach the public’s trust.

But it also noted that Tang’s motivations behind her actions were largely out of concern for those around her, such as her child.

On Friday, Principal District Judge Toh said it was important for confidential Covid-19 information to be carefully managed, as its premature release could have economic significance, such as an impact on markets and retailers.

Such releases could also result in panic buying and crowding at supermarkets, which could exacerbate the spread of Covid-19, he added.

MOH said in April that Zhao, who faces 24 charges under the OSA, had been suspended from her job.

Her case is still pending.

The offence of wrongful communication of information under the OSA carries a fine of up to $2,000 and a jail term of up to two years.