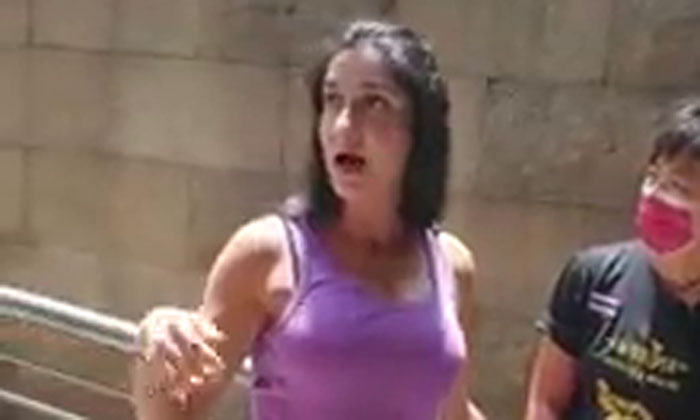 The police said in a statement that they arrested the 40-year-old woman at 9.10pm on Monday (May 4).

"Everyone should take the circuit breaker measures seriously. The police will not tolerate such blatant disregard of the law and wilful breaches of safe distancing measures.

"Let us all do our part to curb the spread of Covid-19," the police added.

The woman will be charged in court on Tuesday (May 5).

Videos of the altercations have been circulating online since Sunday afternoon.

In one clip, the woman says to a couple of other people: "You don't tell people what to do, that's the law."

One replies that she should not have made an indecent gesture, but the woman retorts: "You should have minded your own business... In the first place, you should not have been shouting at me."

In another clip, at a different location, she can be seen covering her face with her arm and holding on to a phone together with a 47-year-old woman, whom she allegedly assaulted, while arguing with another group of people.

Home Affairs and Law Minister K Shanmugam commented on the incident on Monday, and said in a Facebook post that he checked what she might have meant by referring to "sovereign".

"There is a movement in the US, and adherents to that movement, (broadly speaking) reject Government, reject the police and any kind of authority," he wrote.

"Well and good. But then such people should not live within society - she should not expect any of the benefits that come from this system of governance, including her security, medical care, other benefits," he added.

"If she doesn't follow the rules and (say) ends up infecting someone - why should society accept that? Or if she falls ill herself, she will be imposing a medical burden on the rest of the society - whose rules she rejects, presumably."

"Usually, in such cases, there will be more to it than meets the eye," the minister said.

The police had said on Sunday that they received a call for assistance around 12.15pm at 320 Shunfu Road. According to preliminary investigations, the woman in the video, who had previously breached safe distancing measures, was not wearing a mask and had allegedly assaulted a 47-year-old woman who advised her to put one on.