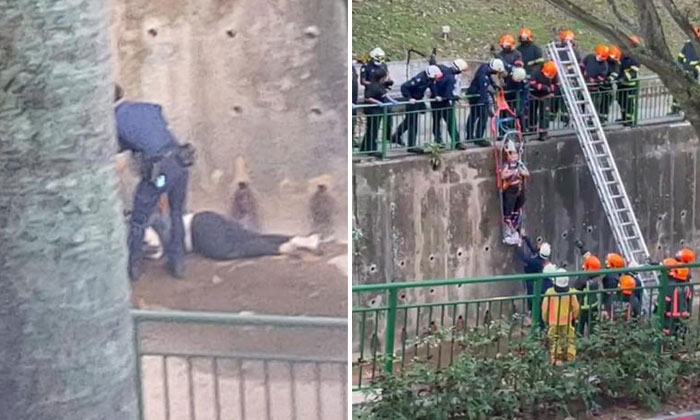 The woman who fell into a canal last Wednesday was not collecting herbs or out for exercise, her husband has clarified.

Mr Chen Qi Zan, 57, said that his wife told him she had fallen down accidentally.

In an interview with Chinese-language daily Lianhe Wanbao, the rag-and-bone man said: "The doctor later told me that my wife thought someone was chasing her. When she turned to run away, she fell into the canal."

He attributed it to his wife's mental health, adding that Madam Hu Hui Fang, 56, has been unwell.

The Singapore Civil Defence Force said it received a call for assistance near Block 510 Jelapang Road at about 5.50pm on March 10.

When they arrived, the team found a woman lying face down at the bottom of a large canal.

Firefighters and rescuers from the elite Disaster Assistance and Rescue Team secured her on a stretcher and rescued her with a hoisting system.

She was then taken to National University Hospital in an SCDF ambulance.

Mr Chen said he last spoke to his wife that morning. He had prepared cereal for breakfast for her but she was not at home. He met her at the void deck and told her to return home to eat it.

Mr Chen did not hear from anyone until 7pm that evening when he was informed of the incident.

Madam Hu suffered a fractured leg and injuries to her face, which included a 4cm-long cut from her eyebrows to her forehead.

Mr Chen, who was working when he got the call, informed his two daughters.

"The doctor told us she was in the intensive care unit and could not determine if there was a head injury. If there was internal bleeding, brain surgery would be required." he said.

But by 2am the next day, he was told her condition had stabilised and she was transferred to a general ward.

Madam Hu had surgery done on her fractured calf and to treat the injury on her forehead.