Woman who died in Tampines stabbing incident was estranged wife of alleged attacker, who also died 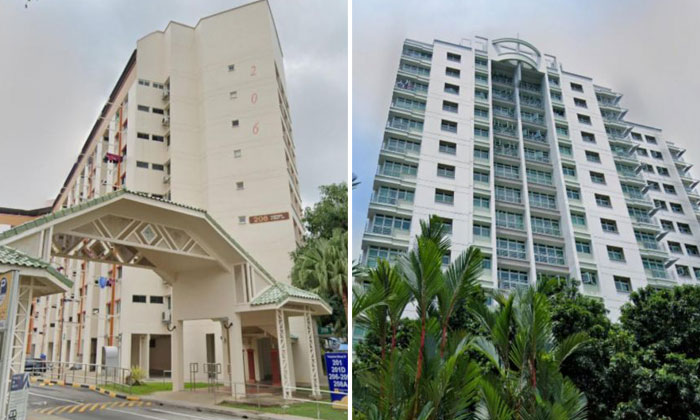 The day before she was to have a reunion dinner with her teenage children, the mother of three was found at a Tampines void deck on Wednesday (Feb 10) covered in blood with slash wounds on her neck.

Ms Iris Ting Su Yin, 42, died on the same day, shortly after being taken unconscious to the hospital.

Hours after she was found, the man she had married back in June 2000 was found at the foot of a block in Punggol.

Ng Chee Kok, 45, also died after being taken to hospital.

The police said on Wednesday that the man is believed to have assaulted Ms Ting.

They were alerted to the stabbing incident on Wednesday at Block 206 Tampines Street 21 at about 6.30am, and found Ms Ting lying motionless at the void deck.

A photo that appears to have been taken from across the block, allegedly just before he was found, shows a man believed to be Ng standing topless on a window ledge on a high floor.

Police investigations into the unnatural deaths are ongoing.

The couple's marriage is understood to have turned sour in recent years, with Ms Ting moving out of their matrimonial home in Punggol.

She went to live with her mother in Tampines, in the vicinity of where she was found on Wednesday morning.

She leaves behind a son and two daughters.

Checks by The Straits Times revealed that Ms Ting took out a Personal Protection Order (PPO) against Ng on March 6 last year. He allegedly breached the PPO about a month later on April 15.

He was charged with two counts of harassment and released on bail of $10,000.

According to court documents, Ng had used violence on Ms Ting, and continually harassed and stalked her in Tampines.

He was scheduled to be back in court next Wednesday.

Ms Ting was the centre head for the Ministry of Education (MOE) Kindergarten @ Farrer Park, having just taken on the role last year.

She had more than 20 years of experience in the pre-school sector.

An image of an official document and a photo of Ms Ting have been circulating online since Wednesday.

The document was a lookout message not for public circulation, and it included the police report number and Ng's personal details.

It also included an image taken from a security camera showing a man believed to be Ng at the void deck of a block.

The circulated photo shows the woman covered in blood, with a black handbag and a phone in a pink case nearby.

The police urged members of the public to refrain from circulating these materials out of respect for the deceased and their families, and said they were looking into the unauthorised circulation of the document.