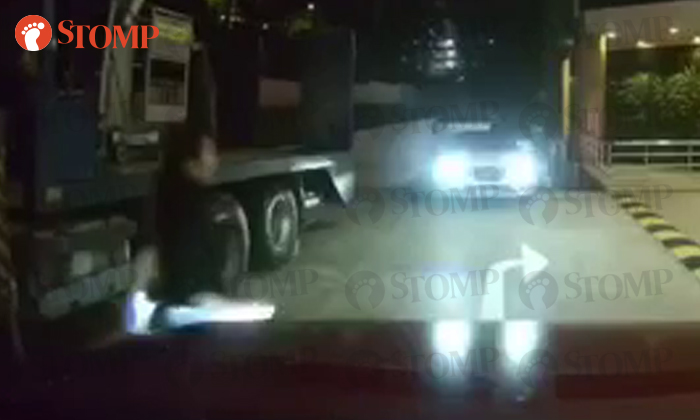 Things could have gone very wrong for a pedestrian and a driver whose car she dashed out in front of from a blind spot outside Orchard Hotel on March 12.

Stomper DL, a Range Rover driver, told Stomp that the incident occurred at around 8.30pm.

He was on his way to Shaw Centre to pick up his wife when he drove past the hotel -- and nearly hit a female pedestrian dashing across the road.

The woman was running towards her ride, which she then boarded.

Describing the incident as "really ridiculous," DL said: "There was a big truck there so the pathway was very narrow. You can also see how dark it was. I nearly knocked her down.

"I drive a Range Rover and it's huge. My front left tyre would have ran over the woman if I had stepped harder on my accelerator. She would be in the hospital and could have died. I would be in jail. My car would be in the workshop."

DL cautioned other pedestrians from following in the woman's footsteps and added: "Drivers tend to be the ones always at fault but pedestrians should behave responsibly too.

"Please be considerate and kind to all the safe drivers out there.

DL also said that the near-miss left him "in shock".

Related Stories
Auntie jaywalks at Eu Tong Sen Street: Who's to blame if she gets knocked down?
Man 'flies 1m' after getting hit by taxi at Toa Payoh pedestrian crossing
Merc driver nearly hits both pedestrian and motorcyclist in school zone at Lorong Chuan
More About:
jaywalk
pedestrian
near-miss