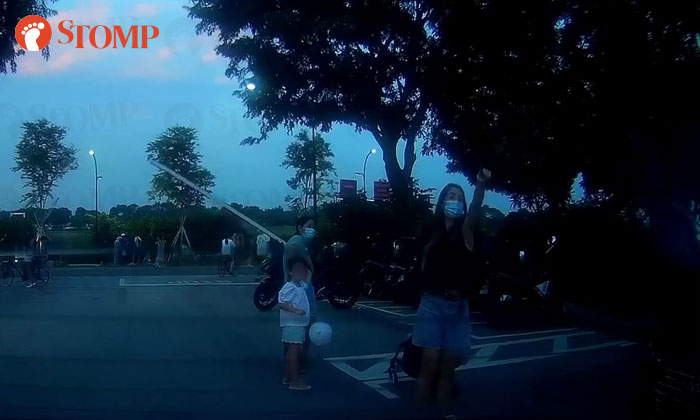 A Stomper was appalled at the behaviour of a woman who blocked a lot for her family car at Gardens by the Bay on Sep 25.

The Stomper shared a video of the incident showing the woman walking with a baby stroller to stand in the middle of a parking lot near Satay by the Bay at about 7.11pm.

The Stomper shared with Stomp that she was angry at the woman's actions as her car was there first.

"As you can see, I was reversing," she said.

"The woman blocked the carpark lot to prevent me from entering and waved her hand to signal that I could not park there.

"She was waiting for her husband, who was driving a Honda CR-V, to drive in."

At one point in the video, the woman also wags her finger at the Stomper.

"How can she do this?" asked the Stomper.

"It is very dangerous as someone else could just barge into the lot and knock her down.

"Her kids were there as well... Why the need to resort to such dangerous methods to chope a lot?

"She is definitely an unfriendly woman!"

When asked if the Stomper confronted the family, she said she did not.

"There was no point in confronting them as they did not seem friendly," she said.

"Her husband looked at me and gave me an angry face as well.

"Please share this to let the public know of this dangerous act.

"The Traffic Police should look into this matter and warn them not to do such silly actions."

Related Stories
Man seen reserving parking lot with traffic cones at Marsiling Road carpark
Man stands at loading bay in Sengkang and refuses to move even as driver tries to reverse into it
Guy stands in Pepys Road lot to 'chope' it for friend even though another driver is waiting
More About:
chope
parking
carpark
Gardens by the Bay