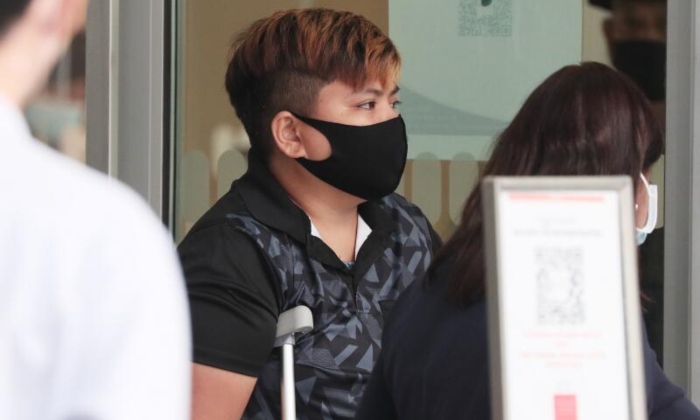 The vouchers, worth $150 per set, were meant for recipients living in one- or two-room Housing Board flats.

Some time in early October last year, Asmah received her own set of grocery vouchers.

A few days later, she peeked into the letter boxes at Block 124 Kim Tian Place, and saw that one of them contained two sets of vouchers. These belonged to a man and his wife, who had since moved to another address.

Asmah, who was then working as a food delivery rider, improvised a contraption to retrieve the vouchers, which she subsequently spent.

The man later called the Health Promotion Board to inquire about his grocery vouchers.

He was informed that they had been mailed to his old residential address and had been used. He then made a police report.

Asmah also stole grocery vouchers belonging to a resident at the housing block.

The resident later learnt that her vouchers had been used after speaking to staff at Tiong Bahru Community Centre. She made a police report on Oct 14 last year.

Court documents state that no restitution has been made and the victims have since applied for replacement vouchers.

In his written submissions, Deputy Public Prosecutor Joseph Gwee urged the court to jail Asmah for at least 10 months.

He highlighted her previous theft convictions, including one in 2015 when she stole an electric bicycle worth $1,300.

"The accused's antecedent record clearly evinces a pattern of offences without any sign or acknowledgement of contrition or remorse," said DPP Gwee.

The DPP also noted that there was premeditation and preparation in this case, as Asmah had used an improvised device.

She is expected to be sentenced on Feb 19.

For each count of theft, Asmah can be jailed for up to three years and/or fined.