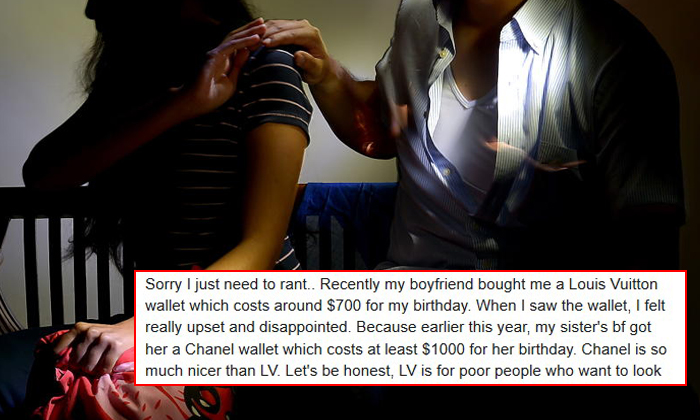 A Facebook post from a woman who complained about her boyfriend for supposedly paling in comparison to her sister's partner has gone viral online.

Her anonymous confession was posted on NUSWhispers' Facebook page on May 26, where it has garnered over 2,400 comments and almost 4,000 shares to date.

The woman went on to say: "I hate to admit but I really feel very jealous of my sister because her bf is willing to spend money on her despite earning just $4k a month. My bf earns at least $5k and yet he is so stingy with me.

"Sometimes I really feel like a loser.. why my sister can find such a good bf but I just cannot. Just because she is taller and slimmer, she can find a good bf.. it's so unfair."

Naturally, netizens were not pleased and called the woman out for being self-entitled.

Some users offered sagely advice, pointing out that a prudent lifestyle as well as the ability to save instead of splurging is a strength.

They also said that there is more to life than easily replaceable material goods. Lasting love and a stable marriage, for instance. 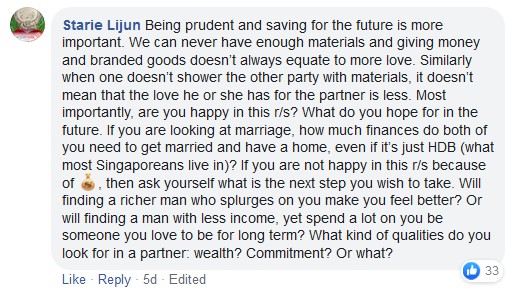 A few, however, did not hold back.

What do you think of this woman's first-world problems?

Could she be just trolling us all for a good laugh during these challenging times?

Who is the 'better' girlfriend: This woman or the one who tore her boyfriend apart for sending desserts over?