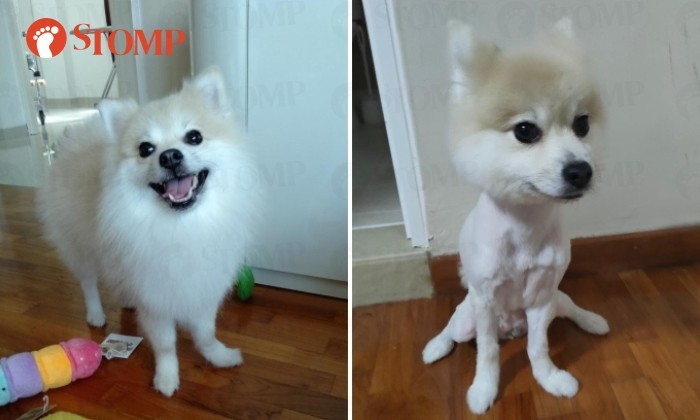 Stomper P was enraged when she saw that her Pomeranian, which costs $4,000, was 'shaved botak to the skin' by a groomer from The Precious Pets, adding that she did not ask for her dog to be shaved.

However, the groomer and the boss of the mobile grooming company refuted her claims and said that her husband had specifically instructed for the dog's hair to be shaved short.

It all started when P arranged a grooming session for her dog, Dede, at her house on Saturday (Jan 9). 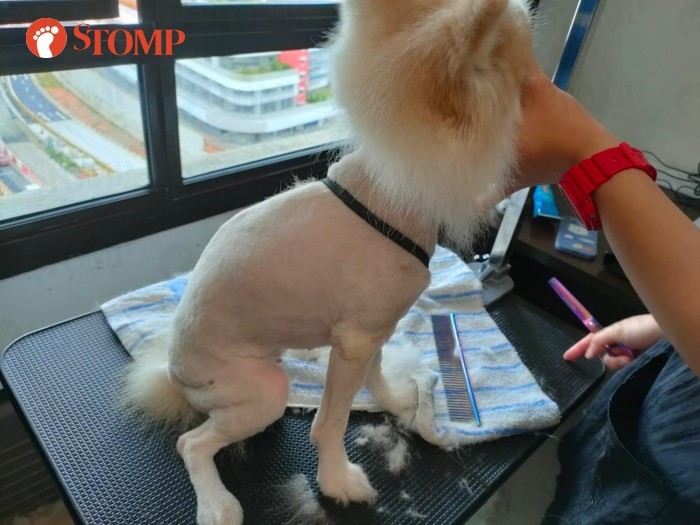 P told Stomp that she requested for the groomer, J, to groom Dede's fur 'like a Shiba Inu'.

"My husband and I showed J two pictures of how Dede looked like after her previous grooming sessions. J saw our own grooming equipment (scissors, comb, shaver) and asked about the shaver," P said.

"I told her that the previous groomer only used scissors to cut Dede's fur and didn't use a shaver. We didn't even charge the shaver battery as it was not in use.

"My husband and I subsequently left Dede with J in the room so that she could do her job comfortably. But when we returned, we saw that she shaved all of Dede's fur, to our horror.

"Her outer and inner coat were all gone. All gone!" 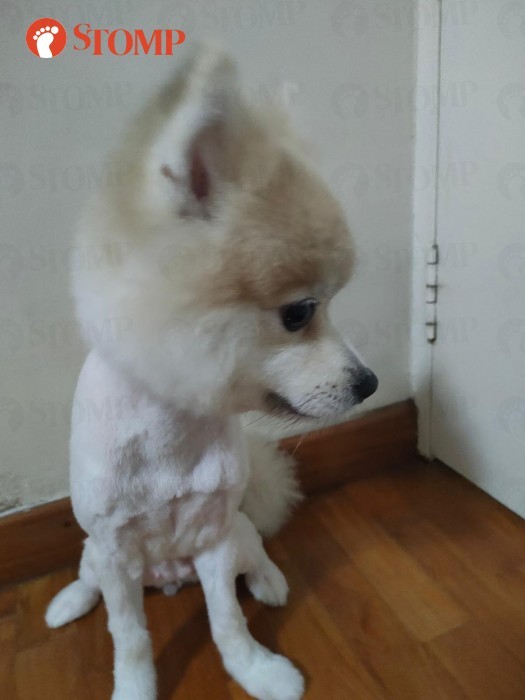 P added that her husband refused to pay the grooming fee of $100 and asked J to get her boss to call the couple.

"The boss did not call us. Instead he just messaged us on WhatsApp asking for payment and saying that the groomer was merely following instructions," P said.

"But we did not instruct her to shave Dede's outer and inner coat! In fact, we told her that the previous groomer only used the scissors to cut the fur."

P explained that they engaged The Precious Pets to groom Dede as they saw that the online reviews were good.

"But look at our Pomeranian now. Pictures speak a thousand words! My dog is shivering all the time as it has no more fur left. It's in shock and refusing to play. It was actually sitting in one corner behind the door that whole day after the grooming."

However, the groomer, J, refuted P's claims and explained in a Facebook post that she did a mandatory pre-grooming consultation with P's husband to clarify how short he wanted Dede's fur to be.

This is my account of what happened I am J, a mobile pet groomer working under The Precious Pets. I was the groomer...

J wrote that as she was setting up the table with her professional grooming tools, P's husband abruptly said: "Don't use your tools. Use ours."

"Their tools were a portable home shaver, and three pairs of grooming scissors," J wrote in her post.

"I highlighted to him that the longest blade length was 2mm and asked if he was sure he wanted me to shave Dede with this. He said okay."

J added that when P entered the room, she clarified with the couple again if they wanted to use their shaver which would result in Dede being 'botak', to which they both replied with a firm yes.

"P then said to her husband that their previous groomer did scissoring and did not use a shaver. Sensing her uncertainty, I immediately reminded them that a 2mm blade would result in their dog being botak", wrote J.

P's husband said 'yes' and  the couple left the room to allow J to groom Dede.

"I proceeded to shave Dede. When I was halfway done, P walked in and commented 'Wah.' I looked at him trying to understand what he meant by that, he said “Later you will know”," J wrote.

Just as J was almost done with shaving Dede's body, P walked in and "started crying", saying that her dog had never had its fur cut so short before. 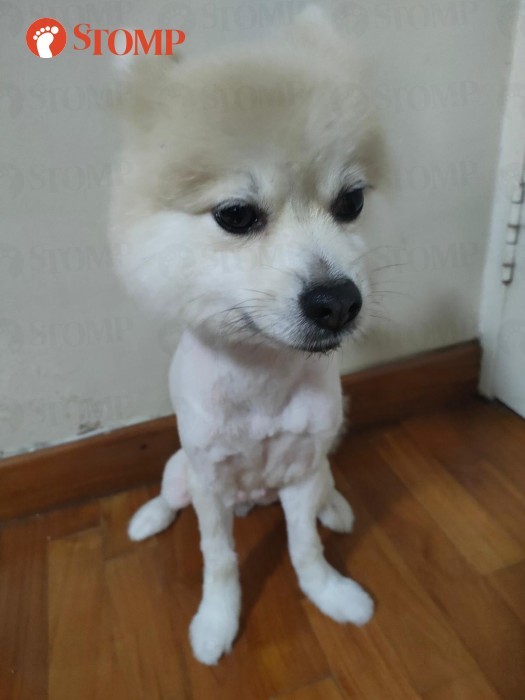 P subsequently told J: “It's a miscommunication. Next time don’t listen to my husband, he don’t know anything one.”

She even told J that her husband was so angry he did not want to look at the dog anymore.

P's husband then signalled for J to enter their bedroom and the conversation that ensued went like this:

P's husband: “How much do you think I should pay you?”

J recounted that P's husband stomped to the toilet door and slammed it. He then proceeded to leave the room while slamming the bedroom door.

In her Facebook post, J said that she subsequently left the house without receiving payment as she "feared for (her) safety".

She mentioned in the Facebook post that she wanted to explain her side of the story as the matter had blown up on social media.

In response to a Stomp query, Sylvester Tan, the boss of The Precious Pets, said: "From our perspective, our groomer had done all that she could under the circumstances to meet the customer’s and the customer’s husband’s requests.

"While we understand that the customer is frustrated at how the grooming turned out, it is not right for her to refuse to pay for our services, then threaten a lawsuit and spread a one-sided story that leaves out important facts.

"Importantly, we understand that the customer has also posted a screenshot of our pet groomer’s Facebook page including her name and photo. We stand by every member of Precious Pets. There can be no excuse for doxing, bullying or harassment."

Sylvester added that they will be taking advice regarding the customer’s threats of legal action, and will be taking necessary action to protect Precious Pets and its members.

You can read the full statement here:

The Precious Pets Care Services (UEN 53205372M) PUBLIC STATEMENT 1. As an animal lover, I know how important it is that...

In response to the statement, Stomper P disputed their claim in the comments section of the Facebook post. 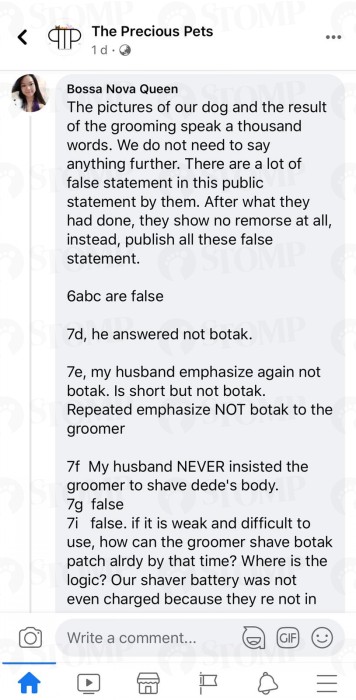 P wrote that the grooming company "showed no remorse at all", adding that their recount of the story is "false".

Many netizens have weighed in on this incident, stating that it is a "he said, she said" situation.

Other netizens, on the other hand, have made it clear which side they are on. 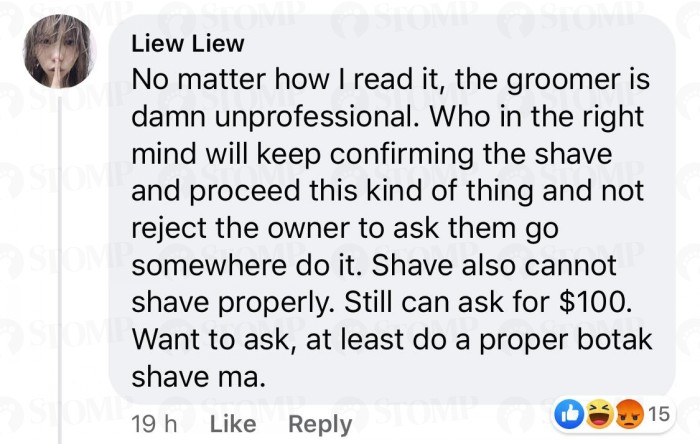