Woman under investigation for allegedly protesting outside Chinese embassy 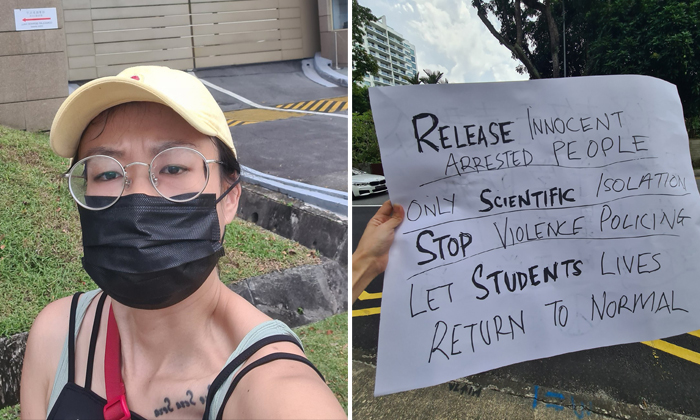 A 32-year-old woman who allegedly staged a protest outside the Embassy of China on Monday is being investigated by the police for taking part in a public assembly without a permit.

The police said in a statement on Tuesday that they were alerted to the incident at about 12.55pm on Monday. The woman, a Singaporean, was directed to stop her protest and complied with the instructions.

The Straits Times understands that the woman is Ms Kelly Ong, who goes by the Twitter handle @kellymilkies.

At 12.27pm on Monday, Ms Ong posted the following tweet: “I am alone outside the Embassy of China in Singapore @ 150 Tanglin road. If I do not reply within 24 hours here I may have been illegally taken into the embassy.”

I am alone outside the Embassy of China in Singapore @ 150 Tanglin road.

If I do not reply within 24 hours here I may have been illegally taken into the embassy. pic.twitter.com/vHG5dNPuJC

Along with the tweet, she also posted a selfie wearing a mask in front of the Embassy of China in Tanglin Road and a photograph of the sign that she allegedly held up in protest which reads: “Release innocent arrested people. Only scientific isolation. Stop violent policing. Let students lives return to normal.”

She said in a later tweet on Tuesday evening that her passport had been confiscated and she hoped to get it back in time to travel to a gaming tournament in Bali.

In their statement, the police stated that it wanted to remind the public that organising or participating in a public assembly without a police permit in Singapore constitutes an offence under the Public Order Act.

They said they have also received queries regarding foreigners living in Singapore who want to advocate for causes relating to issues in China by, for example, displaying posters.

“Foreigners visiting, working or living in Singapore should not import the politics of their countries into Singapore, and are reminded to abide by our laws,” they added.