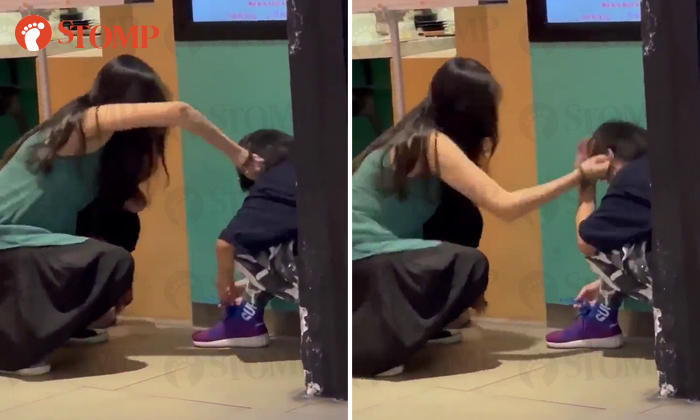 The police are investigating an incident in which a woman was seen publicly scolding and twisting a child's ear at 313 @ Somerset shopping mall.

Stomper Wenqing had witnessed the incident outside Sushi Express on March 19 and sent three video clips to Stomp.

Woman yells at boy and twists his ear in public for not knowing how to tie shoelaces https://bit.ly/3wsH4Rk

According to Wenqing, the woman had been reprimanding the boy for not knowing how to tie his shoelaces and not following instructions. She also kicked the child twice, said Wenqing in a Stomp report on March 21.

"The woman was scolding the boy incessantly, pulling and pinching his ear even though passers-by were staring at her. The boy looked visibly upset, shaken and frightened. I could see that his face was red even though he was wearing a mask," added Wenqing, who ultimately decided not to report the matter to the authorities.

The incident sparked concern among netizens. On Stomp's Facebook page, the video post has garnered over 354,000 views and 1,600 comments.

He told Stomp: "I am a concerned member of the public as well as a father who chanced upon the video on Sunday, at around 3.30am, while I was surfing Facebook.

"I was appalled at the contents of the video, which suggests the boy (whom I opined to be of the age between 10 and 14) could be under constant physical and psychological abuse, considering he was succumbing to the alleged kicks and evident pinching of his ear.

"I am against any form of child abuse and feel compelled in my good conscience to report this to the police, so that the authorities can make the necessary effort to provide assistance (and possibly protection) to the boy, and to the adults involved.

"I hope we can really help the boy. Thank you."