Woman tries to alight cab on KPE, assaults cabby after getting pulled back 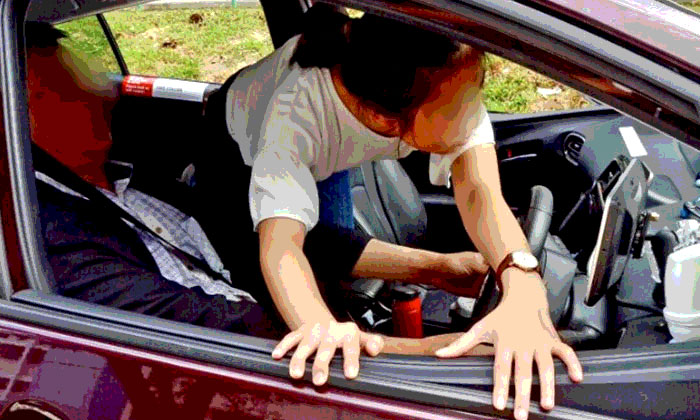 A woman allegedly attempted to alight a cab while travelling along the Kallang-Paya Lebar Expressway (KPE), and started assaulting the taxi driver after the latter prevented her from doing so.

The incident happened along the KPE, after the Pan-Island Expressway (PIE) exit, on Monday (March 12) at around 5pm.

The cabby, Mr Fu, 44, told Shin Min Daily News that he had picked up the woman, who looked to be in her 20s, at North Bridge Road, near the Supreme Court of Singapore.

“She asked to go to Punggol. I saw her flagging for cabs by a traffic light and was worried that she did not understand traffic rules in Singapore, so I asked her if she was Singaporean.

“She insisted that she was, and things became a little tense after that.

“I switched on the radio, but she asked me to turn it off.”

Mr Fu said that as he drove onto the expressway, the woman suddenly asked him to stop the car so she could get out.

As this was against traffic regulations, Mr Fu could not comply.

He tried explaining to the woman the situation.

“At that time we were in the rightmost lane, She suddenly wanted to alight via the left rear door.

“I was worried that she would endanger herself, so I pulled her back with one hand while holding onto the steering wheel with the other.”

However, the woman suddenly lunged at Mr Fu and started hitting him.

Amidst the chaos, Mr Fu was forced to engage the brakes.

He continuously sounded the horn to warn passing vehicles.

“She quickly wound down a window and climbed outside.

“After that, she sat on the road in front of my cab and attempted to stop passing vehicles.”

Mr Fu called the police and tried to stop the woman from leaving.

However, she ultimately got on a vehicle driven by a couple.

In response to media queries, the police confirmed that a report was lodged, and investigations are ongoing.