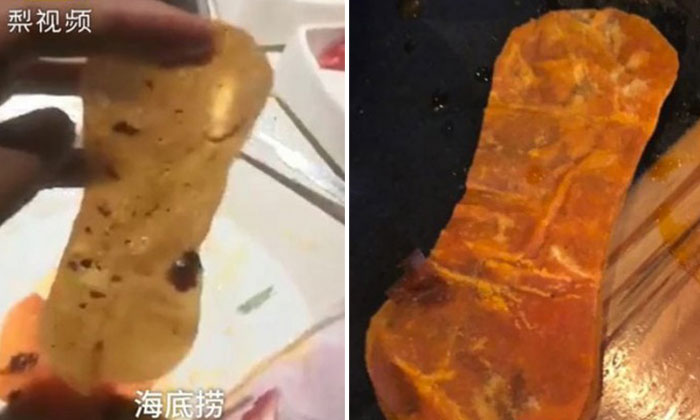 What are the odds of finding sanitary pads in your soup at not one, but two hotpot restaurants in succession?

A woman surnamed Ni claimed to have fished out a sanitary napkin while dining at a Haidilao outlet in Shenzhen, China, on Sept 28.

She demanded one million yuan (S$200,100) as compensation, the restaurant manager said.

Unhappy with the restaurant's explanation that the paper-thin object she found was probably wrapping from the meat, Ni and her companion returned to the eatery the next day and trashed the furniture there.

Haidilao staff then called the police who said Ni should pay for the damaged property.

The police also collected the 'pad' as well as the restaurant's surveillance footage to investigate the alleged lapse in food safety.

The hotpot chain eventually gave Ni an 800 yuan refund, but matters unfurled when the police received a report that the woman had made a similar complaint at another hotpot restaurant she patronised the next day.

Coincidentally, she had asked for compensation after finding a sanitary pad in her meal at Chongqing Impression restaurant on Sept 29.

Ni told reporters that she did not need compensation and she just wanted to "expose unsanitary conditions" in hotpot restaurants.

She is not trying to scam the restaurants, the woman said.

Haidilao has over 300 restaurants in China, Japan, South Korea, Singapore, and the United States, and recently raised close to US$1 billion (S$1.37 billion) in its initial public offering in Hong Kong.

The woman's fears are not unfounded, however. There is a growing concern over food safety in China in recent years.

Last year, the kitchens of two Haidilao outlets in Beijing were discovered to be infested with rats. A worker was also spotted trying to fix a sewage blockage with a soup ladle.

Ni's complaints also follow a recent incident where a pregnant diner had a big scare after fishing a dead rat out from her soup at another well-known hotpot chain. She was allegedly offered $4,000 for an abortion by the staff.