Woman thanks Gojek driver after delivering baby in his car: 'He didn't want our money' 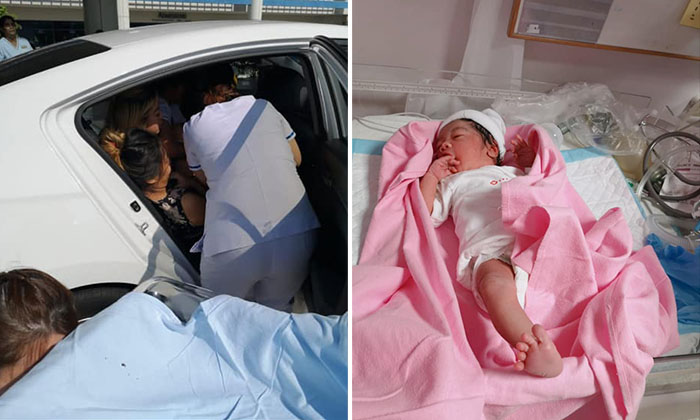 A woman is thankful to a Gojek driver after she delivered her baby in the back of his car on Friday (Aug 23).

Stomper Nish was not expecting her baby to arrive until Sep 1, but things changed and she found herself giving birth to her daughter, Nellya Adora, at about 7.30am on Friday.

The post has since garnered over 600 reactions and 310 shares.

Nish was accompanied by her parents-in-law and sister-in-law as they boarded a Gojek towards KK Women's and Children's Hospital (KKH).

She told Stomp: "I couldn't control it anymore. The contractions became more and more painful. My sister-in-law kept asking the driver how long it was before we would reach KKH and we found out it was going to be about 15 minutes.

"I kept shouting and moaning and few minutes later, my water bag burst. I knew my baby will come out anytime soon. My sister-in-law said she saw the baby's head coming out and we both didn't know what to do. I was so panicked.

"The Gojek driver just asked to push so I pushed about two times and the baby came out, but we only reach KKH about 5-10 minutes later.

"The car was bloody, got the water bag, my shit, everything but the Gojek driver didn't say anything. My husband say he will give cash for clean up but the driver didn't want to take it.

"The driver even waited until the nurses came to us and made sure my baby and I were settled before leaving."

In Nish's Facebook post, she said: "Would like to say BIG THANKS To GOJEK driver... for his help throughout the journey in assisting me and making sure we reach KK safely. Im sorry for the chaotic moments and the mess in your car.

"Thank you to the KK hospital staff also who ran towards the Gojek car to assist me and baby once we reach the hospital."

Related Stories
Grab visits couple after wife delivers baby in GrabCar: "Moaned in pain like an angry ogre"
Woman gives birth in Grab car while on the way to hospital, hails driver and husband as heroes
GrabCar driver picks up 2 passengers but drops off 3 -- after woman gives birth in his car
More About:
Gojek
baby
giving birth