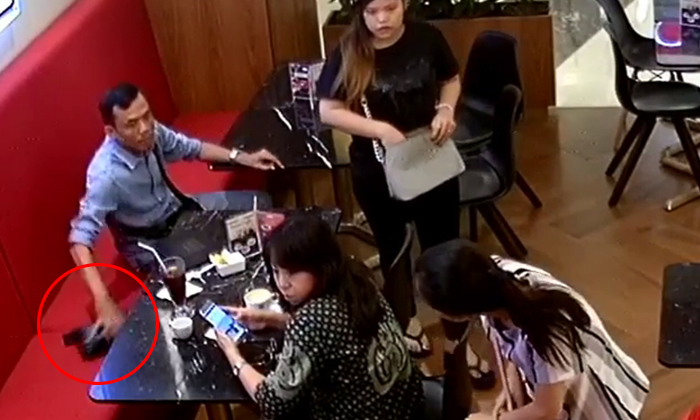 A video of a man taking someone else's bag and hiding it at a restaurant while a female customer was distracted has been circulating on WhatsApp.

A Stomper who was sent the video via WhatsApp, was told that the incident occurred in Bedok, although Stomp cannot confirm this.

He left his bag and what appeared to be a mobile phone behind on the seat.

A man and a woman were then seen entering the frame and sitting next to the table.

Another woman carrying a pink handbag arrives and the man gestures to the woman.

The trio then proceeded to make a move on the unsuspecting woman who was seated opposite the bag.

One of the women tapped her on the back while the man stealthily slides the bag and phone over to him.

One of the women involved in the act then glanced around furtively as the man who had stolen the bag stood up to leave.

Related Stories
Man and woman arrested for serial theft after allegedly stealing handphone from Lucky Plaza shop
Cashier arrested after taking money from Bukit Merah store over 10 times in a day
Man caught on video grabbing diner's bag with laptop inside and walking out of Jollibee at Novena
More About:
stealing
theft