Woman takes shirt from Clementi Mall store, hides it on herself and leaves without paying 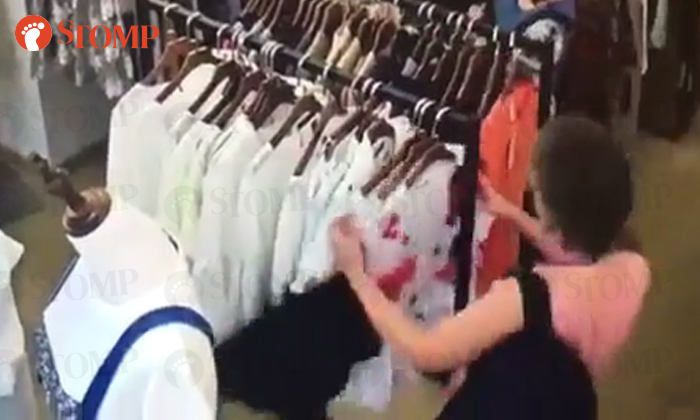 A woman was caught on camera taking a black shirt from an apparel store at The Clementi Mall, hiding it on herself and then leaving the premises without making payment.

Stomper A, whose husband is the owner of Dolly Farm, contributed videos showing what the woman did.

In the clip, a middle-aged woman, who is dressed in a pink top and blue bottoms, can be seen browsing through clothes in the store.

At one point, she removed a black shirt -- that was being hung on a clothes rack -- from its hanger and held it in her left hand, while continuing to look at the other blouses on display.

She then went to another side of the store where she seemed to be inspecting another item on display, but can be spotted appearing to hide the black shirt.

Stomper A said, "She stuffed the shirt in the space between her bag and her waist, then left the shop (our main entrance is on the left hand side). You can see it in the clip.

"She was very calm, friendly and smiled to everyone, including our customers."

According to A, a police report, which Stomp received a copy of, was made on July 23 at about 2.35pm.

In response to media queries by Stomp, the Police confirmed that a report was lodged and investigations are ongoing.

Watch the video (action starts at about 0:53) below.