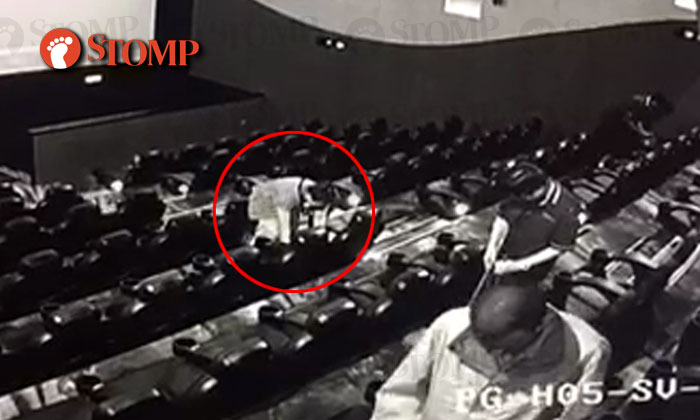 A woman allegedly took an 11-year-old teenager's Samsung tablet in a cinema at Waterway Point in Punggol yesterday (Jun 24) at around 9pm.

Stomper SL, the parent of the child, alerted Stomp to what happened after receiving a video from the cinema's management showing the woman engaging in the act.

She explained what happened in an email and telephone interview:

"My child's tablet was lost after we were watched 'The Mummy' at 7.10pm in theatre 5.

"The device is an 8-inch Samsung Galaxy S2. It is gold in colour and has a red cover."

"After the movie ended at around 9pm, she discovered that she left the tablet in the cinema.

"We went back to look for it. The management traced the CCTV footage and found out that a woman took the phone. She sat at seat C14 and was the last cinema-goer to leave the theatre.

"We have made a police report."

In the video the Stomper sent, the woman can be first seen walking out of the row she was seated at.

After she reached the stairs in the cinema hall, she stopped and started looking into her bag.

It was at this point that she apparently saw the tablet at a seat below her.

She glanced on top of the stairs before going towards the seat. She then allegedly took the tablet from the seat and left the theatre quickly thereafter.

The Stomper hopes that the tablet can be recovered as there are many important photos stored inside.