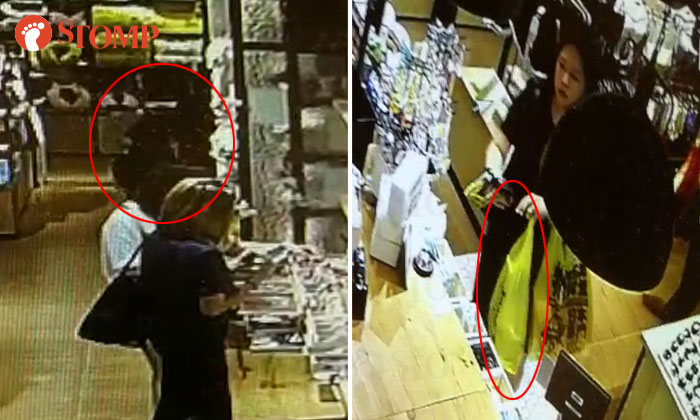 A woman was caught on video picking up a shopping bag that belonged to another shopper at The Green Party in City Square Mall last Friday afternoon (June 28).

Stomper Anonymous alerted Stomp to the incident and shared videos she had recorded of the store's CCTV footage.

Anonymous and her daughters were shopping at The Green Party when she placed her plastic bag containing food she had bought from Don Don Donki on the floor.

She told Stomp she had put the bag down while she was trying on slippers and subsequently forgot about it.

"About half an hour later, I remembered my bag of shopping and returned to the store but it wasn't there," she said.

"I asked the staff if I could see the CCTV footage just to confirm if I was carrying it when I entered the shop.

"However, I found out another woman had picked up my bag instead.

In the video, Anonymous and her girls are seen looking at items in the shop as a woman in black walks near them.

The woman is then seen looking back before bending down to pick up a yellow plastic bag.

She is later seen at the cashier counter holding two yellow plastic bags despite walking in with just one.

"She could have taken the bag to the cashier for safekeeping before I came back for it," Anonymous said.

"Instead, she took it for herself."

Anonymous said the bag contained about $10 to $20 worth of food.

She decided not to make a police report regarding the incident.

"It is not about the money or the items but the act itself that annoyed me," she said.

"I decided to share this on Stomp so that she can see what she did and hopefully, learn from this."