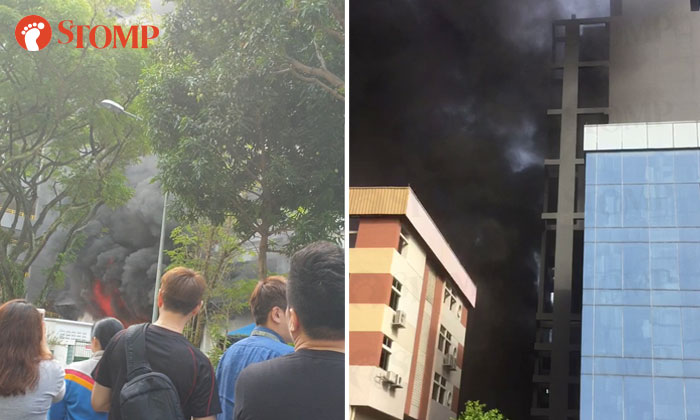 A woman was taken to hospital after a fire broke out at the headquarters of pest control company Rentokil Initial Singapore in MacPherson on Friday morning (Dec 21).

Stompers Jeffrey, Yet Kefu and Jannah alerted Stomp to the fire.

In a video taken by Jeffrey from Macpherson Road, billows of dense black smoke can be seen coming from the building even from hundreds of metres away.

Yet shared a video he took of the smoke rising from the building while he was travelling along Airport Road towards MacPherson.

Stomper Apid and Sharon also forwarded a video that is circulating on WhatsApp of Singapore Civil Defence Force (SCDF) officers fighting the fire.

The SCDF posted on their Facebook page at 10.20am that they responded to the fire at 16 Jalan Mesin at about 9.20am.

The fire is confined to a storage area on the ground floor of a 3-storey building.

A total of 7 water jets were deployed around the affected area. The fire is under control.

"Upon SCDF's arrival, the fire was well alight at the ground floor of a building," it said.

A woman was taken to Raffles Hospital by an SCDF ambulance.

At 10.51am, SCDF wrote that the fire was under control.

Upon SCDF's arrival, the fire was...

"The fire is confined to a storage area on the ground floor of a 3-storey building," it said.

"A total of seven water jets were deployed around the affected area."