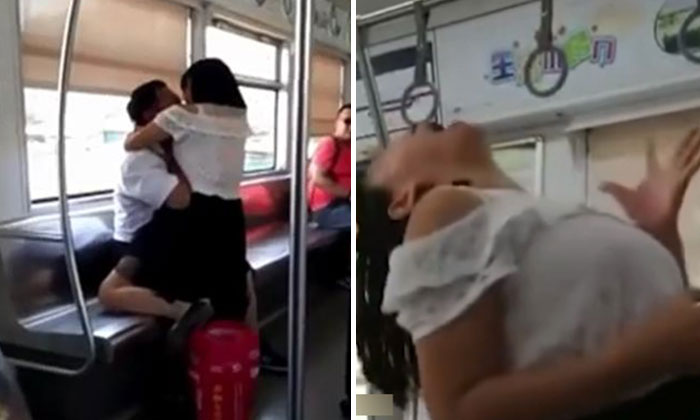 A woman in Chongqing, China, suddenly bit a male commuter on board the Chongqing Metro train, lapping up the blood on the floor from the attack, before stripping naked.

The harrowing incident happened at the Yudong station, located in the Banan District on Wednesday afternoon (July 18), with many netizens describing the event as a real-life enactment of the zombie horror movie “Train to Busan”.

Spooked by the bizarre attack, many commuters ran in fear, with witnesses saying that the victim left a blood trail on the floor as he fled, reports Lianhe Zaobao.

In a YouTube video by Netizen Watch, the woman is seen wrapping her arms around the man and biting him on the face.

The man who is holding a phone in his right hand then uses it to strike the woman's hand, and the woman subsequently falls to the ground.

She proceeds to lick the blood of the victim which had fallen on the ground.

As the victim flees, she suddenly stands up and strips.

Another Facebook video by the South China Morning Post also shows the woman screaming hysterically before lunging herself at the victim.

According to local news, a spokesman from the Chongqing Metro said that at around 1pm, the 36-year-old woman from Sichuan, Lee, became hysterical after an argument with her husband.

The argument allegedly arose over the couple’s relationship.

It is unknown if Lee and Gao knew each other prior to the attack.

After metro staff members were alerted to the situation, they quickly evacuated the commuters according to safety procedure and informed the authorities.

Lee was apprehended and remanded at the Chongqing Municipal Public Security Bureau (Rail Transit Branch), while Gao was quickly conveyed to a hospital for treatment.

In response to media queries, the police said that the case was currently under investigation.