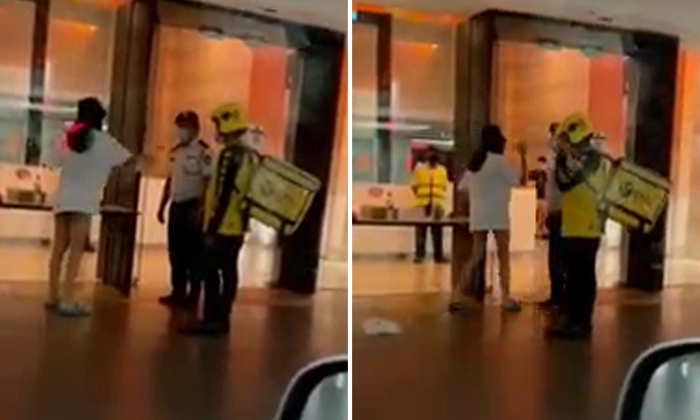 Upset that her bubble tea could not be sent to her doorstep, a woman in Malaysia splashed the drink at a delivery rider and a security guard.

Facebook user Michael Cheang posted a 20-second video of the incident that occurred on November 26, at around 8pm.

In the video, the woman can be seen reprimanding the delivery rider and the security guard.

She then splashes her milk tea at them, slams the cup on the ground and flashes her middle finger, before storming back indoors.

According to Michael, the woman had insisted that her drink be delivered to her doorstep. However, the deliveryman was stopped from doing so by the security guard due to Covid-19 measures.

The deliveryman tried explaining the situation to the woman, who chided him and the security guard instead.

During her angry outburst, the woman also said that she had never encountered such issues in other countries including China and asked "why is Malaysia so terrible".

In his post, Cheang commended the security guard and the delivery rider for remaining calm and professional "in the face of such hot-tempered and arrogant residents".

Related Stories
S'pore actor Joshua Tan stands up to man who behaved aggressively during altercation in Sydney
Man rains punches on older commuter over loud earpiece music on MRT train
Anhui woman kneels down in public, begs suitor to give up after 5 years of wooing her
More About:
viral
facebook
dispute
food delivery
rude
argument