Woman so paiseh by $84.90 bouquet with "mahjong paper" and rubber band that she had to hide it 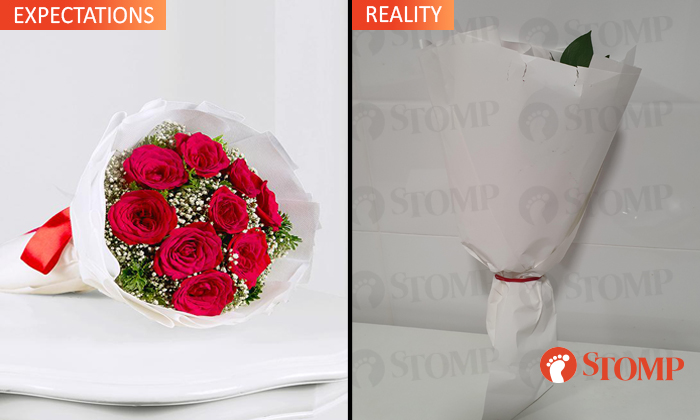 Stomper Anonymous was left so stunned and embarrassed by her Valentine's Day bouquet that she had to go home with it hidden in a paper bag.

She said that the Sweet Jade bouquet that she received from florist company Flower Chimp did not justify its $84.90 price tag.

According to Flower Chimp's website, "nine red roses complemented by sweet Baby Breath (Gypsophila) make sweet Jade a true stunner among our arrangements. Elegantly wrapped, this bouquet is often given for romantic occasions, birthdays and anniversary." 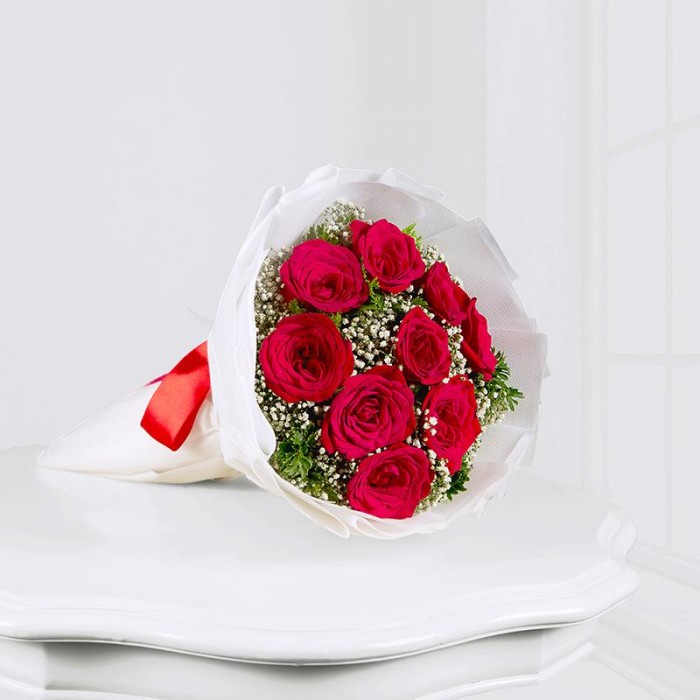 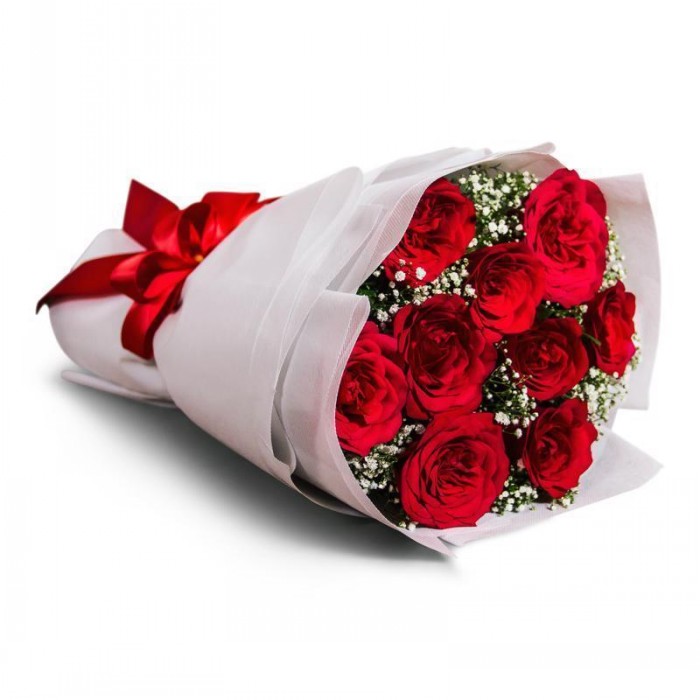 Anonymous said her bouquet was indeed a "true stunner" — but not in a good way.

Photos that she shared with Stomp show how the bouquet was wrapped in stiff-looking white paper with tears in it.

A rubber band was used to tie the bouquet instead of a ribbon as shown on the website. 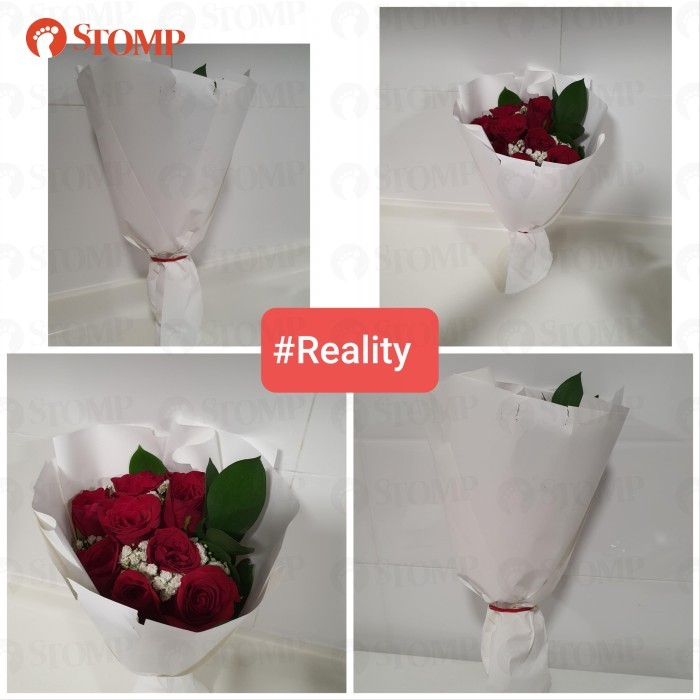 Anonymous told Stomp: "Flower Chimp has delivered the most disappointing and embarrassing bouquet ever!

"Their service and flower presentation are just not worth the penny paid. Even supermarkets selling small bouquets have better wrapping and presentation.

"Ran out of nice wrapping paper? No problem, just use some white kraft paper or mahjong paper.

"Ran out of ribbons? No problem, just use a rubber band. As long as it holds the bouquet together ya.

"When I received the bouquet at my office, I was so embarrassed to walk back with it. I even had to put it in a paper bag to bring home."

Anonymous also wrote to Flower Chimp on Facebook, but felt that the "standard apology" she received was lacking.

The Stomper added: "Apparently, one of my friends also ordered from them and the turnout was disappointing too." 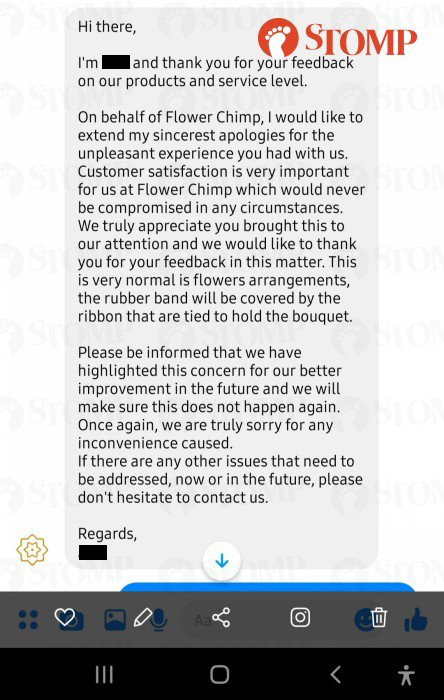 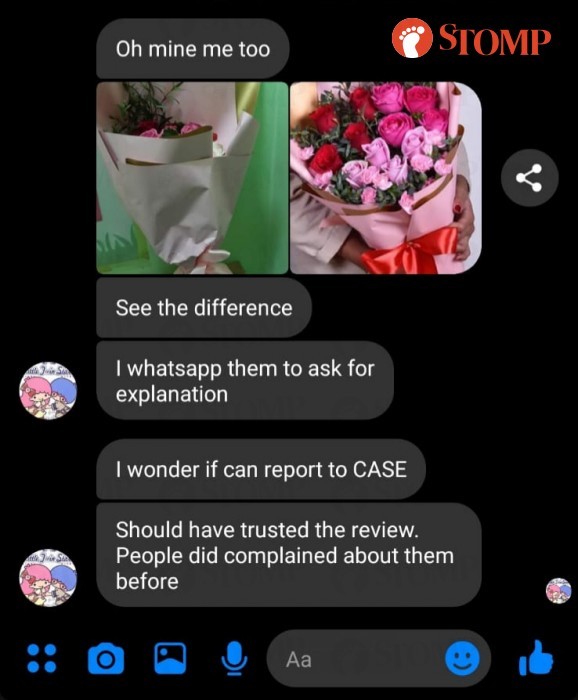 (Conversation between Anonymous and her friend)

Anonymous said: "I just wanted to share my experience and warn others.

"There were also quite a number of bad reviews about them online."

A search on Flower Chimp's Facebook page show that majority of the comments on its posts have been hidden from public view.

In response to Stomp queries, a spokesman for Flower Chimp confirmed that it had received feedback from the customer about the issue.

The spokesman said: "As you can see from the pictures provided by the customer, the flowers are indeed very fresh and the amount of roses are the same.

"We have explained to the customer that the ribbons were there before going out, but somehow were untied and lost during in transit.

"This is most probably due to high volumes handled by our delivery agent and at the same time we are also investigating the matter with our partner florist."

According to the spokesman, a 10% discount code was offered to the customer, which she rejected.

Flower Chimp also offered a complimentary apology bouquet to be delivered to the customer, but said it is "still pending reply".

"This is the least we could do to make up for the missing ribbon," said the spokesman, adding that it would continue to follow up on the case with the customer.

Related Stories
Florist company and customer hurl F-word at each other after complaint over $74.50 bouquet
XpressFlower says lapses 'unavoidable' after failed deliveries on Valentine's Day
Two florists break customers' hearts by failing to fulfill over 350 orders on V-Day
Local florist comes under fire for failing to deliver flowers and not responding to customers on V-Day
More About:
Valentine's Day
Valentines
bad service
expectations vs reality