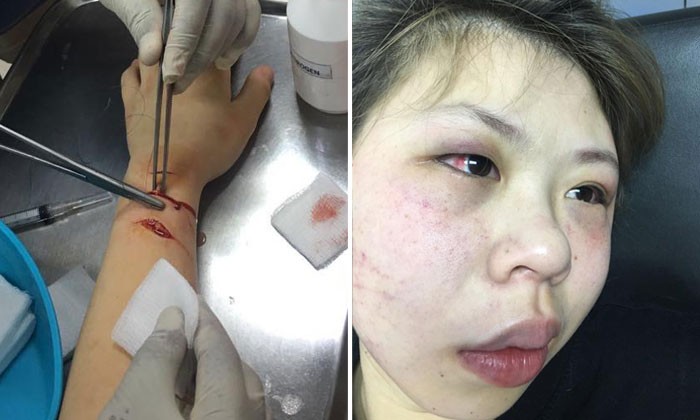 A woman has taken to Facebook to describe her traumatic experience after getting assaulted and slashed by snatch thieves in Kuala Lumpur on Oct 11 at around 11.30pm.

According to Malaysian Digest, netizen Amy Ng had just finished watching a movie with her husband at AEON Rawang shopping mall when two men on a motorcycle tried to snatch her handbag from her arm.

She was paying for a parking ticket at that time and her husband had gone to retrieve his car from the car park.

Amy explained on Facebook that she was hit in the face after she refused to let go of her bag.

She was also slashed thrice on her arm by one of them men with a knife.

Her husband arrived thereafter and got down the car to stop the assailants who then fled the scene.

Amy was later taken to a clinic to get stitched up.

Based on her photos, the netizen sustained bruises on her face and has three deep wounds on her arm.

Amy's post has been shared almost 28,000 times since is was published on Oct 12.

Related Stories
Man punches aunt after she rejects his leave, leaving her with bloody and fractured nose
Man robs masseuse, sexually assaults her for an hour and threatens to kick her private parts
More About:
assault
thief
KL
Malaysia
injured
facebook