Woman shares her brave battle with cancer in heartbreaking photos after having 4.8kg cyst removed 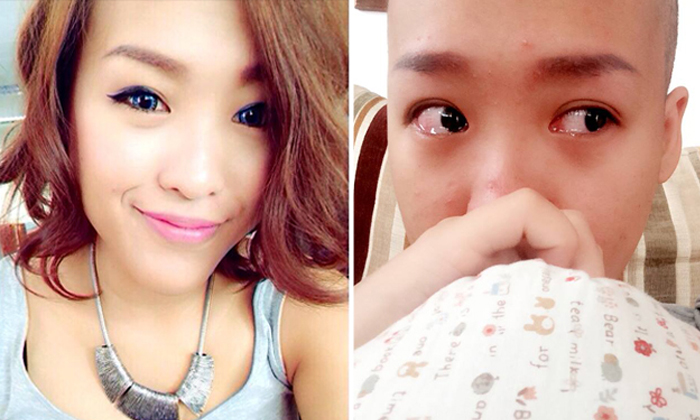 A woman has taken to Facebook to share how she first discovered she had ovarian cancer, battled the disease -- and finally overcame the war against it.

Priscilla Jenn Li, whose photos are tagged in Malaysia and Singapore, had visited the hospital when she started experiencing abdominal pains.

According to her post, she suffered from Stage 3 of ovarian cancer and had a germ cell tumour. Her stomach soon swelled to the size of someone who is 32 weeks pregnant.

She later underwent surgery to remove a cyst -- losing one ovary in the process -- which she described to be the 'size of a basketball' and over 4kg.

Jenn wrote, "[The] cyst was supposed to burst and it would produce this liquid and prepare the uterus for pregnancy, but apparently mine didn't burst. SO it just keep growing."

Speaking about having difficulty when it came to sleeping and feeling immense pain, Jenn shared that she also had a 24cm wound and lost 10kg from the surgery.

Her ordeal continued with chemotherapy and injections, which left her with hair loss and weight fluctuation.

Even then, Jenn continued to keep her chin up and remained positive. She had written in one post, "Never stop smiling."

In addition, she had the support of loved ones, whom she wanted to remain strong for.

The cancer survivor, who has finished her chemotherapy sessions, said she wanted to share her journey because she wanted others to know what it was like to be 'struck with such misfortune, fight the battle and win the war'.

She ended her post by saying, "Here I am now! Did occasional workout (weekly) and [am] happy to live my next tomorrow with no regrets for I was given a second chance.

"Deeply thanks to my Mom especially. My dad for giving mom a strong support so she wouldn't give up, knowing she couldn't show her sadness in front of me. My sis and bro for being there for me and family.

"My bae. For everyday texting and voice recording and exchanging news of his life in Singapore and things I could look forward to.

"Where would I be without all of you? Thank God for the blessing."

See photos and more details of Jenn's battle in the gallery.