Woman shames catcaller who made kissy noises and told her, 'I wanna lick your p***y' 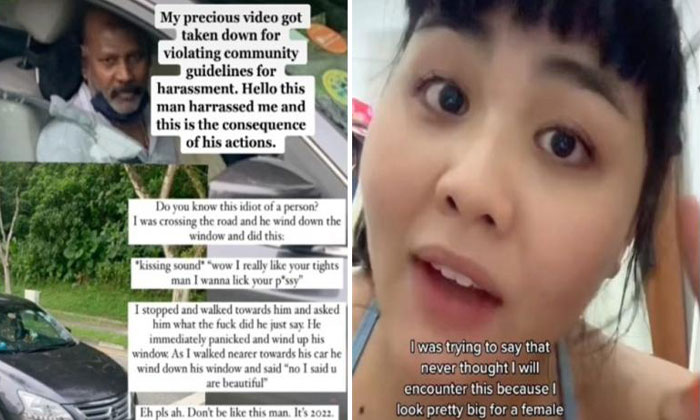 Enraged by a man she claims made a lewd and obscene remark to her in public, a Singaporean woman took to social media to shame the alleged offender.

The woman, whose TikTok handle is n00tison, posted a video on March 2 where she reveals that a man catcalled her from inside his car while she was in Yio Chu Kang on the way to the gym.

She claims the man made kissy noises at her before saying: “I really like your tights man, I wanna lick your p***y.”

“This man, this person, decided that he (wanted) to be an idiot today,” she said, pointing to a clear picture of a man inside his vehicle.

She added that she plans to make a police report.

According to her, the man appeared shocked when she responded with “what the f**k did you just say?”

He then corrected himself and said he merely thought she was beautiful, before driving off.

His shocked response could mean that no one had stood up to him before, she said.

The woman also claimed that a friend had a similar experience with the same man in Punggol.

“I don’t know how many girls he has done this to,” she said in exasperation. “He would never have thought that anyone would confront him.”

She ends the video by saying: “It’s 2022. You think you can get away with this? No, you won’t. You are going to suffer the consequence(s). I have your picture and I have your car plate, and I’m gonna (let) everybody know who you are.”