Woman sells Bedok flat after putting up with neighbour's noisy parrot for a year: 'It's hard for us to sleep' 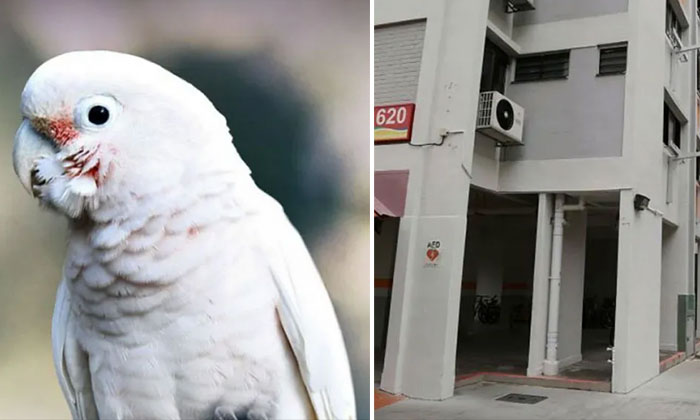 For almost all of us, home is where the heart is.

But for one 45-year-old woman living in Bedok, it’s a place she dreads – all because of her neighbour’s noisy parrot.

It’s gotten so bad that she has decided to sell off her flat at Block 620 Bedok Reservoir Road.

According to Shin Min Daily News, the woman, surnamed Wu, said the parrot is kept in a cage along the corridor, and would make noise every morning and night.

Wu said: "I've lived here for 13 years and have always been comfortable up until a year ago (when her neighbour moved in)."

"The (noise) would last till 10pm, and on weekends, the situation would get worse making it hard for us to sleep."

"At first, for the sake of being good neighbours, I didn't say anything, but I didn't expect the family to take advantage of our silence."

Shin Min visited the block and noted that the parrot could be heard squawking upon exiting the lift.

The male occupant of the unit that owns the parrot said that he would "return" the parrot, but did not elaborate.

Another resident, 26, said she has had to use ear plugs while sleeping, though the bird noises were still audible.

Wu said: "I once complained (about the noise), and the neighbour moved the bird cage into the house, but that made the problem worse.

"They would interact with the bird till late, which made things unbearable. My child has to go to school, and I have to go to work. They're too inconsiderate."

Wu said she is a light sleeper and has not been able to get a good night's rest because of the bird noises.

"I couldn't even bear to go home after a busy day as I couldn't rest. After going through this torture, I decided to sell the house."

She has since found a buyer, and is slated to move in February.