Woman notices dog left in car while going to Marina Square, returns to see it still inside 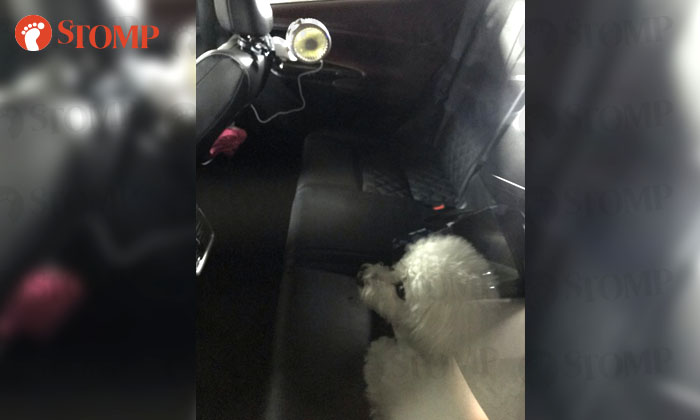 Stomper Applebits noticed a dog left alone in a car, which had its windows up, at the carpark of Marina Square on Sunday (Dec 2) and found it there still, when she returned two hours later.

The Stomper was with her family and friends and arrived there at about 5.45pm and parked their vehicle next to the car with the dog.

When they got out of the car, they saw the dog through the window of the car's passenger seat.

The Stomper said: "We all looked in the car and saw a small white dog.

"The windows were up, but there were fans placed in the car and the dog looked calm so we did not think much of the situation.

"My friends and I thought that the car owner was gone for just a short while, but we were wrong."

The Stomper went into the mall to watch a performance with her family and her friend's family.

At about 7.45pm, two hours after they had left the carpark, they returned to find that the dog was still there.

"My friends and I were shocked.

"We thought that the owner would have been back, but everything in the car looked the same as it was before," she added.

The Stomper, who has a dog of her own, was worried about the white canine left in the unventilated car.

She said: "I know that indoor carparks, like the one the dog was in, have higher levels of carbon dioxide and carbon monoxide in the air, which might not be safe for the dog.

"If I wanted to go shopping and bring my dog along, I would have put it in a dog bag and carried it around.

"My friends and I were all wondering why the owner brought the dog out in the first place, if it was going to be left unattended in a vehicle for so long."