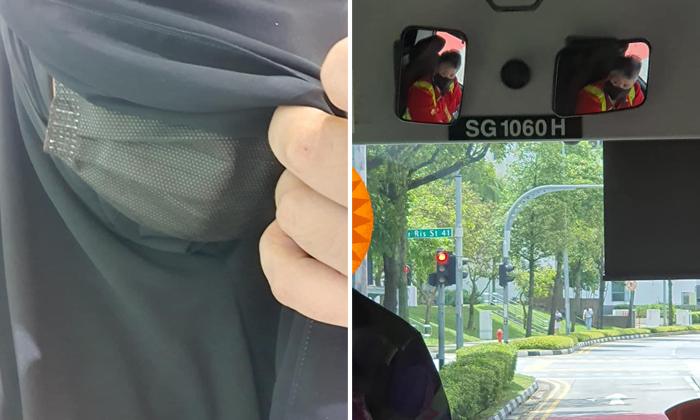 Transport operator Go-Ahead Singapore has responded to an incident involving a commuter who said she felt humiliated by a bus captain following a verbal dispute between the two.

Facebook user Maizura As'ari said the incident occurred when she boarded bus service 12 along Pasir Ris Drive 6 on Saturday (Jan 30), at around 11.47am.

In a post written minutes after the incident, Maizura said that the bus captain had mistakenly thought that she was not wearing a face mask and had replaced it with a niqab instead.

According to Maizura, the bus captain told her: "THIS ONE CANNOT WEAR!"

She recounted: "I pull aside my niqab to show her that I am wearing a face mask inside. That's what I usually do when approached by Social Distancing Ambassador or when asked during safe entry."

However, Maizura alleged that the bus captain continued shouting at her "in front of other passengers" and her children, as well as told her to wear her mask outside.

Tagging Go-Ahead Singapore in her post, Maizura also said: "Your bus driver humiliates me in public. I demand an apology."

Her post has been shared over 1,300 times to date.

In response to a Stomp query, a spokesman for Go-Ahead Singapore said it is aware of the incident involving its bus captain and a commuter.

The spokesman shared: "The bus captain concerned has been identified and she has explained that in ensuring mask wearing on the bus, she wanted to verify with the commuter on the use of a face mask upon boarding."

"She understands that the requirement was met when the commuter displayed her face mask on and no further communication was necessary.

"We acknowledge that the message delivery and approach taken by the bus captain in this instance must be improved and regret the upset caused.

"We are making every effort to ensure that there will not be a recurrence of this incident."