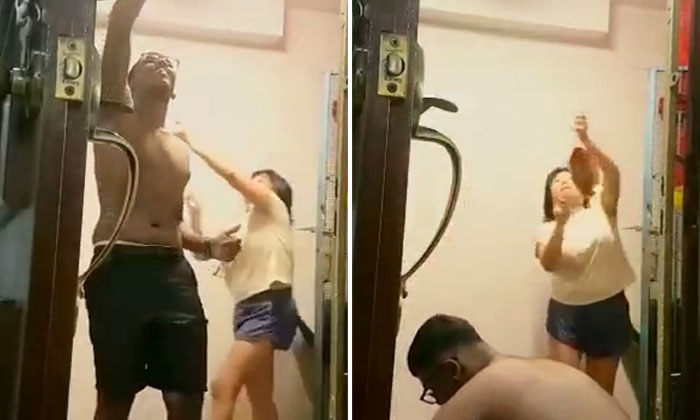 The police confirmed with Stomp a report was lodged and that a 48-year-old woman is currently assisting with police investigations.

The police are investigating an incident where a woman was caught on camera clanging a gong while her neighbour was carrying out his bi-weekly prayer routine, sparking outrage among netizens.

Facebook user Livanesh Ramu posted a video of the incident on Wednesday (June 9), showing him ringing a prayer bell and performing his prayer rites outside his front door.

Like many other Hindus this has been a part of our family’s 5-minute, twice a week prayer routine. Having lived in this home for more than 20-years we never had any issues. I guess with COVID we have a new norm... UPDATE: Dear fellow Singaporeans, thank you for all the support and concerned shared towards my family and I during this difficult period. The Singapore Police Force has reached out to us. We are coordinating with them at the moment.

His neighbour is seen stepping out of her home and bending down to pick up a stick to hit a gong she is holding and proceeds to clang loudly behind and over him for about 16 seconds.

She then returns to her unit.

Livanesh explained in his post that like many Hindus, the routine he was carrying out is five minutes long and performed twice a week.

"Having lived in this home for more than 20 years, we never had any issues," he said.

The video has since gone viral with over 38,000 views.

Netizens have expressed their support for Livanesh and slammed the woman for being disrespectful and intolerant.

Livanesh posted in an update that he is in contact with the police regarding the matter.