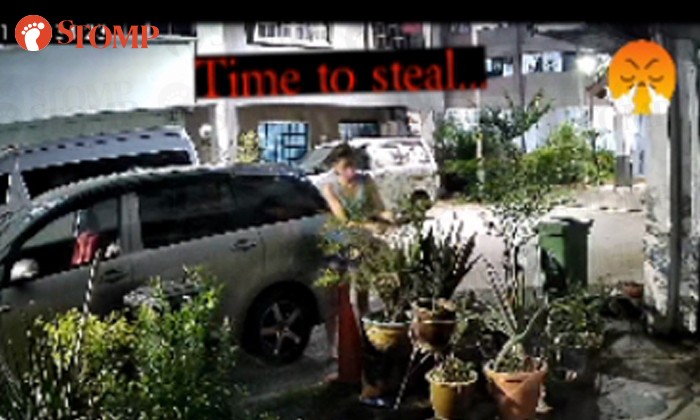 A woman was caught on camera damaging a pomegranate plant and stealing its branches outside a residential unit along Serangoon Road.

Stomper Harry shared CCTV footage and photos of the incident that occurred outside his mother's shophouse last Wednesday (Nov 11), at 8.33pm.

In the video, the woman, who is dressed in a blue tank top and shorts, can be seen approaching the potted plants outside the shophouse and looking at them.

She then reaches out and breaks off branches from the plants two times, before placing the loot in her bag and leaving.

Harry told Stomp: "This is at the small lane next to St. Michael's.

"This lady came by to steal and vandalise my mum's flowering pomegranate plant.

"She must have lost a lot of money at some illegal gambling den nearby and needed some luck with the pomegranate leaves and flowering buds.

"If she had just asked, we could have cut the branches properly for her but her sneaking around to break off the branches could kill the plant."

Asked if he recognised the woman, Harry said that he has seen her around before and a police report has been made.