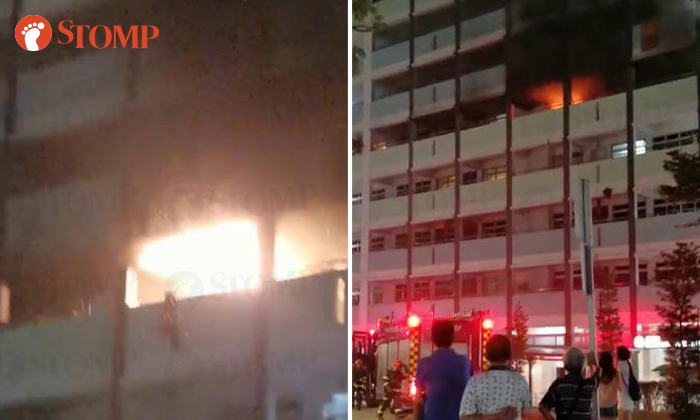 A fire broke out in a Housing Board (HDB) flat at Block 158 Yung Loh Road on Sunday evening (August 18).

Stompers Jon and Dale contributed photos and videos of the scene.

Jon was making his way home when he saw the fire.

He told Stomp: "I saw a lot of fire engines there."

In Dale's videos, the fire can be seen blazing as fire engines arrive at the scene.

An explosion can also be heard at one point in the video.

In response to a Stomp query, the Singapore Civil Defence Force (SCDF) said: "SCDF responded to a fire at a fifth floor unit of Block 158 Yung Loh Road at about 7.45pm on August 18.

"The fire, which involved the contents of the living room, was extinguished by SCDF using a water jet.

"Four persons were conveyed to Singapore General Hospital and Ng Teng Fong General Hospital, including a woman who was rescued from the kitchen ledge by SCDF firefighters.

Related Stories
Vegetation fire the size of 2 football fields breaks out near Marina East Drive
2 vegetation fires on Sunday, with one being the size of 10 footballs fields
Car catches fire in Punggol, sounds like firecrackers going off
More About:
fire
scdf
Jurong