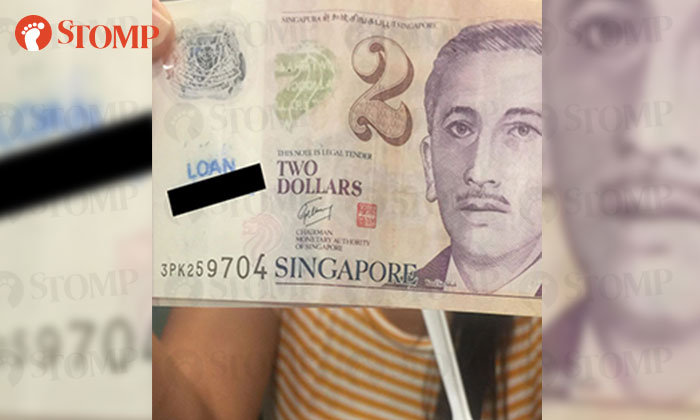 Stamped on the note were the word ‘Loan’ and a contact number.

Ahamed told Stomp that he was the one who first noticed the stamp on the note, as he was queueing up to buy a McDonald’s meal at Jurong Point shopping mall after the two met up later in the evening.

“I immediately told my girlfriend about it.

“I was quite shocked to find this. I suspect the contact number is for an illegal moneylender or a loan shark.

“She told me she had gotten the change from a bubble tea shop in Orchard Road. I checked through the rest but the rest of the change but the rest did not have the stamp like this one.”

Ahamed forwarded a photo of the note, and Stomp has blanked out the contact numbers on it.

In response to a Stomp query, a spokesman from the Monetary Authority of Singapore (MAS) that notes which are damaged or defaced, such as in this instance, are considered to be mutilated.

Under the Singapore Currency Act, mutilated notes command no value, but MAS may, out of goodwill, award value to mutilated notes provided there is no evidence suggesting that they have been deliberately mutilated.

Anyone who receives a mutilated note may deposit the note at any commercial bank in Singapore where he or she has an account.

The banks will authenticate the notes and assess the value according to guidelines from the MAS. The assessed value will then be credited to the bank account of the receiver.

In the event that the bank is unable to authenticate the value, the mutilated note will be sent to MAS for assessment, upon which MAS will inform the bank on the assessed value of the note.

The bank will then proceed to credit the assessed value to the bank account of the receiver.

Related Stories
Lau Lup's luck takes a bad turn after receiving this $10 note
Lau Lup receives a sign that he's getting a promotion in his career and family
Lau Lup gets auspicious sign that he might prosper for nine generations
More About:
strange
money
note