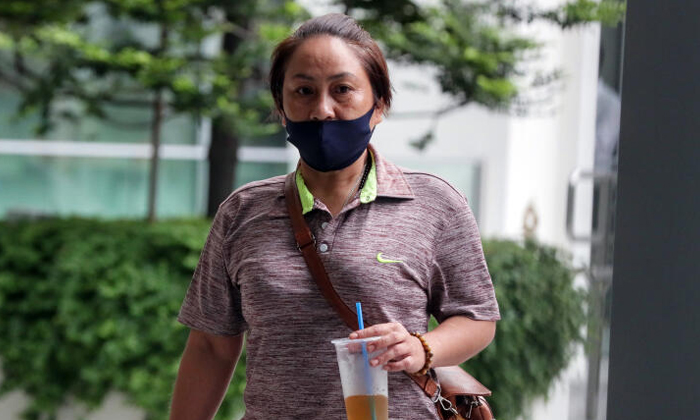 In a fit of rage, a woman pushed the front wheel of her bicycle over the foot of a safe distancing ambassador and slapped his arm when he stopped her from leaving after she failed to observe Covid-19 restrictions.

Singapore citizen Pham Thi Mai Thao, 43, was sentenced on Thursday (April 22) to a week in jail after she pleaded guilty to one count of committing a rash act.

One count of using criminal force was considered for her sentencing.

The court heard that the incident took place at Geylang Serai Market in August last year, during phase two of Singapore's Covid-19 reopening. The market was barricaded due to entry restrictions to limit the number of people there.

At around 8.40am, the ambassador saw Thao talking to a stall owner through a barricade and told her not to make any transactions as she would be breaching safe distancing measures.

Thao, who was a food stall assistant at the time, said she was only talking to the store owner.

Moments later, the ambassador saw her passing money to the stall owner through the barricade and tried to stop her. Ignoring him, Thao paid for the items and tried to leave.

When the ambassador stood in front of her power-assisted bicycle to block her way, she ran the front wheel over his foot.

He tried to move away but she ran her bicycle over his foot a second time. She continued to push the bicycle towards him, hitting his right shin.

To stop her attacks, the ambassador held on to the bike but she slapped his arm in anger.

Noticing the ruckus, the assistant director of the National Environment Agency, who was patrolling the area, called the police.

No obvious injuries were found on the ambassador and he was discharged with medication.

Deputy Public Prosecutor Jane Lim called for a week's jail for Thao, saying that a deterrent sentence was needed.

In sentencing, District Judge Marvin Bay said he noted that the woman had pushed her bicycle against the ambassador three times, which showed a degree of deliberation and persistence in her offending.

"While the injuries were not significant, it is utterly unacceptable for acts of violence to be visited on safe distancing ambassadors, who are simply doing their job in protecting the public," he said.

Thao asked for time to settle personal matters and is out on $5,000 bail. She will serve her sentence in a week’s time.