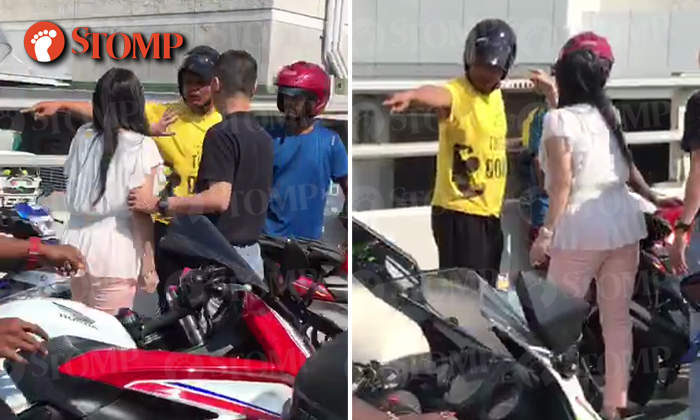 A woman was seen arguing with several other motorcyclists at Woodlands Checkpoint earlier today (June 9) at around 10.15am.

Stomper Tiffanie filmed a video of the incident and said she saw the car travelling on the motorcycle lane when a collision occurred. Stomper S also contributed photos of the scene.

Tiffanie told Stomp in a phone interview, "The car was all along on the rightmost lane, which is for motorcycles. Then a bike behind seemed to accidentally hit the car.

"The woman, who is a passenger of the car, then got down and started scolding the bikers. There were several of them stopped by the side of the road," she added.

According to the Stomper, the woman was accompanied by a guy, who is the car's driver.

"He was just standing there and trying to stop her," said Tiffanie.

In the video, the woman and a few motorcyclists can be seen in a heated argument. The parties involved also made multiple angry hand gestures at one another.

It is unclear what happened after the video.