Woman pulls down shorts and pees on train, as urine trickles down cabin floor 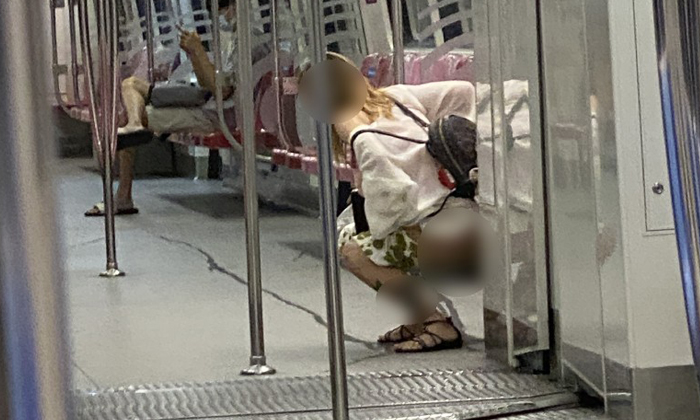 Commuters on an MRT train were left stunned when a woman pulled down her shorts and squatted to pee in one of the cabins.

The incident was witnessed by AsiaOne at around 12.35am on Monday (Aug 29), on a North-South line train headed towards Jurong East MRT station.

According to the news outlet, as the train was travelling between Choa Chu Kang and Bukit Gombak stations, the woman, who appeared to be in her late 20s and seemed intoxicated, was lying down across three seats. She did not have a mask on and was coughing violently.

She then got up and stumbled across three cabins, leaving one of her bags behind. When she reached the third cabin, she went to one of the corner seats, pulled down her shorts and squatted to urinate.

A passenger in that cabin immediately stood up and walked away when he saw her doing this.

The stream of urine trickled down the cabin floor towards the front of the train.

Later, the woman got off at Jurong East MRT station and sat on some stationary escalator steps. A man then approached her and offered to help her up the escalator.

According to the Environmental Public Health (Public Cleansing) Regulations, it is an offence to urinate or defecate "in or upon any street, arcade, vacant land, river, canal, ditch, drain or watercourse or in any place to which the public has access except in any sanitary convenience provided for such purpose".