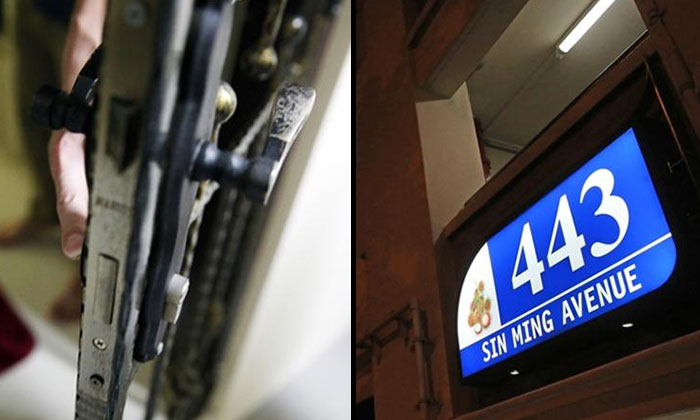 To boost her husband’s business, the wife of a locksmith allegedly poured glue into the keyholes of doors at several HDB flats along Sin Ming Avenue.

The court heard that Huang has a locksmith service company registered under her name, and her husband is a locksmith. To boost the company’s business, Huang went to nine different households in the neighbourhood to pour glue into their keyholes, thinking that the affected residents would then have to turn to her to rectify the problem.

An occupant from one of the affected households later found out from the Resident’s Committee (RC) that he was not the only one affected, and suspected that someone was behind this.

He decided to call the police on the night of April 26.

Investigation by the police revealed that Huang had previously placed up flyers along Sin Ming Avenue, looking for temporary workers.

She was thus familiar with the place and chose to strike there.

She added that she had only wished to boost the business so that her husband could earn more money, and increase her allowance.

Huang was sentenced to three weeks’ jail on Tuesday (July 10). She handed the victims a total of $1,070 as compensation for the damages caused.

Huang’s defence lawyer said her husband was a registered bankrupt and had incurred many gambling debts, which was why the company was registered under Huang's name instead.

Huang’s lawyer also revealed that she faces tremendous pressure due to financial difficulties, and currently stays in a one-room rental flat.

Huang has two young children and was originally a housewife. She later took on an administrative job, fetching home about $1,000 monthly.

Aside from the children, Huang also has to care for her parents who are ill and bedridden, with monthly medical bills chalking up to $500.

As a result, she can only afford to stay in a rental flat.  Huang is also noted to suffer from adaptation disorder.